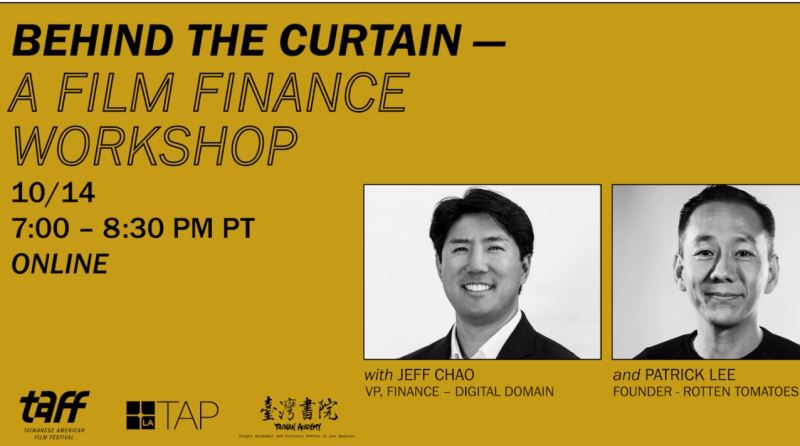 Moderated by Cindy Lu (陸昱彤), Executive Director of the Taiwanese American Film Festival (TAFF), the virtual event saw Chao and Lee share fundamental insights on the process of getting a film financed, from conception to sale.

The two panelists shared insights on how filmmakers secure opportunities to engage with funding and financing institutions, shedding light on what investors are looking for and the landscape of film and distribution in today's market.

Chao is the Vice President of Finance and Business Development at award-winning visual effects studio Digital Domain. Previously, Jeff was Senior Finance Director at Participant Media, where he managed film investments for a US$250 million film fund sponsored by Participant Media and Image Nation Abu Dhabi, which produced films including "Men In Black 3," "Lincoln," "Contagion," and "The Help."

Throughout the years, Chao has been involved with film investments for over 31 films with budgets ranging from US$2 million to US$75 million.

Entrepreneur Lee is best known for being a co-founder and founding CEO of leading entertainment review website Rotten Tomatoes. Apart from serving as an advisor to a number of startups, Lee is a founding team member of Gold House, a nonprofit organization aiming to promote Asian culture.

Supported by the Ministry of Culture and Taiwan Academy in Los Angeles, TAP-LA's second workshop closed with an interactive Q&A session to allow registrants and live chat participants to put forward their own questions.

Previously in September, TAP-LA launched its first online workshop "Breaking in: A Screenwriting Workshop," focusing on different screenwriting styles, how to find representation, and how to embrace writer's block.

Now into its fourth year, TAFF has served as the main platform in the United States of films and multimedia by Taiwanese and Taiwanese American filmmakers. The fourth edition of TAFF kicked off online on Oct. 24, 2020.