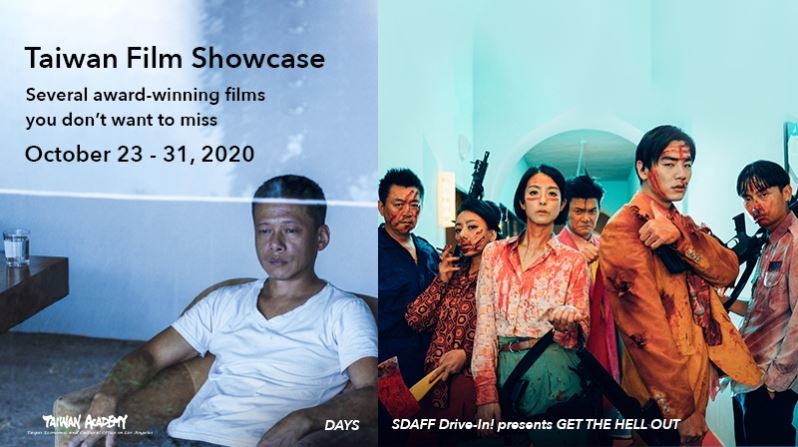 A total of 7 Taiwanese features and 4 shorts, along with cinematic works from 24 countries, were screened at the 21st edition of the San Diego Asian Film Festival (SDAFF) from Oct. 23 to 31 online and at a drive-in theater in California's second-largest city.

The documentary fiction "Days" depicts an encounter between an ill man and a young Laotian migrant worker in exquisite examinations of the two men's alienation, isolation, and daily routine, while zombie-themed comedy "Get The Hell Out," which will be shown at a drive-in theater on Oct. 24, pokes fun at Taiwan's political scene.

"Nobody" offers a sensitive examination of an elderly queer woman's life, and "Archiving Time" is a documentary that sheds light on film preservation and restoration. "The Husband's Secret," meanwhile, is a black-and-white melodrama of a love triangle. "The Reason Why I’m Home" explores family ties and the meaning of life.

The screening of "Love and Death in Montmartre," a documentary that depicts the life and work of late lesbian modernist writer Qiu Miaojin (邱妙津), was accompanied with an online Q&A session featuring the film's director Evans Chan (陳耀成) and Ari Larissa Heinrich, English translator of "Last Words from Montmartre (蒙馬特遺書)," one of Qiu's best known works.

The lineup of shorts were "The Granddaughter Detective (孫女偵探)," "Ahma & Alan (阿嬤與阿倫)," "Hello from Taiwan (你好，從台灣來的)," and "Smiling Buddha (微笑彌勒)."

"The Granddaughter Detective" addresses language barriers brought by generational gaps, and "Ahma & Alan" tells a story of second generation Chinese immigrants in the United States who embarked on a journey to self-identity.

While "Hello from Taiwan" centers on a young Taiwanese American girl and her mother's attempt to overcome familial and cultural divides, "Smiling Buddha" seeks to raise awareness about Alzheimer's disease.

Founded in 2000 by Pacific Arts Movement, SDAFF has grown to become the largest annual presentation of Taiwanese films outside of Asia, showcasing the diversity of perspectives, languages, stories, and genres by filmmakers in Taiwan today, according to the festival.