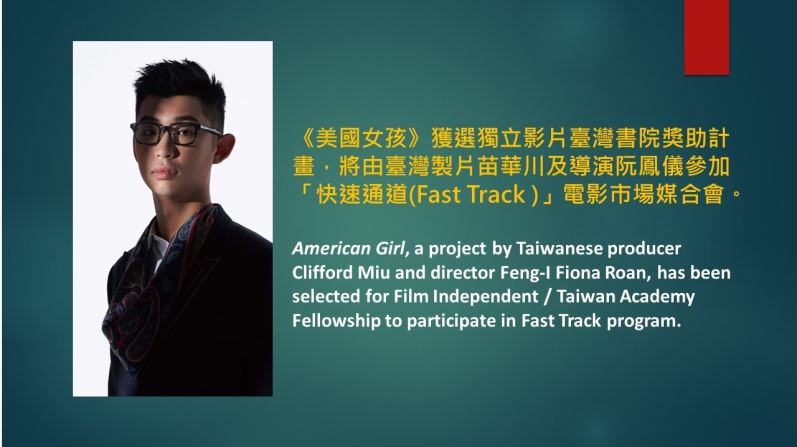 "American Girl (美國女孩)," a Taiwanese film project set to shed light on differences between eastern and western culture, has been selected for Taiwan Academy Fellowship grant, and will participate in Fast Track program from Nov. 16 to 19 online.

Proposed by Taiwanese producer-filmmaker Clifford Miu (苗華川) and director Feng-I Fiona Roan (阮鳳儀), "American Girl" unfolds when a thirteen-year-old girl who previously resided in Los Angeles struggles to adjust to life in Taipei and to deal with conflicts with her family members amidst the SARS epidemic in 2003.

"The Last Ferry from Grass Island (島嶼故事)," a 2020 short film produced by the Taiwan-based filmmaker, received the Jury Special Mention at Tribeca Film Festival and has recently been selected for Cannes Cinefondation 2020.

Feng-I Fiona Roan received her her MFA in Directing at American Film Institute in 2017, and, in the same year, she released her autobiographical short film "Jie-Jie (姊姊)," which portrays conflicts within a newly immigrated family of three — a mother and her two daughters – and the challenges facing the three since their immigration to the U.S.

The short film won the HBO Asian Pacific American Visionary Award in 2018 and was subsequently distributed by the network. In that same year, "Jie-Jie" received the audience award at Tokyo Short Shorts Film Festival & Asia and the 1st Prize of Children’s Jury in the category "Best Live-Action Short" at the Chicago International Children's Festival.

"Clifford is very eloquent in how he spoke about and put together the financing for 'American Girl' and his ambition as a producer," states Film Independent, the U.S. nonprofit organization that teamed up with Taiwan Academy in Los Angeles to launch "Taiwan Academy Fellowship" grant in 2020, offering chances for selected projects to participate in "Fast Track."

Fiona also showed her talent as a director, Film Independent says, adding that because the project has completed legal and financial consultation with strong financial support, it would be the best timing for them to build relationships with executives that can help promote their projects towards finding a life theatrically and develop their careers through "Fast Track."