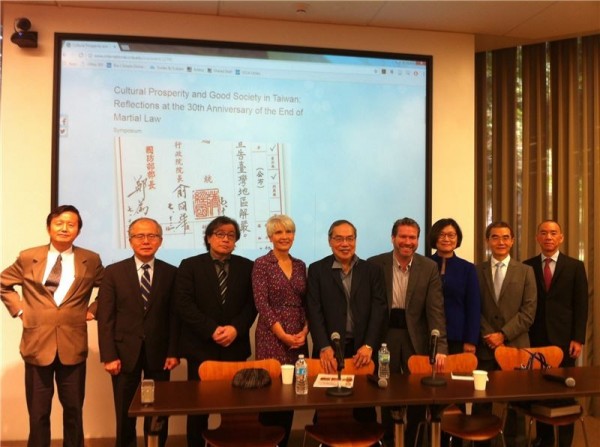 An international symposium on the transition of democracy in Taiwan was held at the Charles E. Young Research Library of University of California, Los Angeles on Nov. 17.

Co-organized by the Taiwan Academy in Los Angeles and UCLA, the symposium explored the development and history of democracy in Taiwan after the lifting of martial law in 1987.

The scholars believed that democracy and cultural diversity are the key source of soft power for Taiwan, and that its transition to democratization could serve as an example for China as well as other countries. As the younger generations of Taiwan are not limited by political taboos or ideologies today, they can lead the movement for democracy to move forward.

During the discussion, Professor Chen first shared his political enlightenment when he was studying in the U.S., which prompted him to engage in pro-democracy campaigns such as the Tangwai movement (黨外運動). Chen pointed out that the success of the Tangwai movement was attributed to rise of the middle class and upon the expectation that the government would work to provide a better life for its people.

Wu pointed out that Taiwan’s democracy developed alongside national identity and civil society, and he believed that Taiwan will gradually develop a true multi-party system instead of being ruled by one dominant party.

Wu also reminded the audience of the fact that Taiwan’s path to further democratization will likely be influenced by China’s interference and external restraints.

Rigger described Taiwan under martial law as a “reservoir,” noting that the Nationalist government suppressed the development of democracy and only ended martial law to release the “pressure” after realizing the reservoir was at breaking point. Only then was Taiwan allowed to be reborn, Rigger added.

There are still many such reservoirs that are used to suppress the public in the world, and Taiwan’s recent history can inspire international communities, added Rigger.

Yan stressed that Taiwan has an active civil society, which is an important source of soft power and a role model for China and overseas Chinese communities to learn from.

The scholars all held a positive attitude toward the deepening of democracy in Taiwan. Chen and Rigger believed that because the younger generation have faith in democracy and civil movements, they will be able to form a new national identity, which in turn will help resolve the tension in cross-strait and international relations.

At the end of the symposium, the organizers showcased director Wan Jen’s (萬仁) 1995 masterpiece “Super Citizen Ko (超級大國民),” with Michael Berry of UCLA hosting a post-screening forum to explain the stories and history of martial-ruled Taiwan that were illustrated in the film.