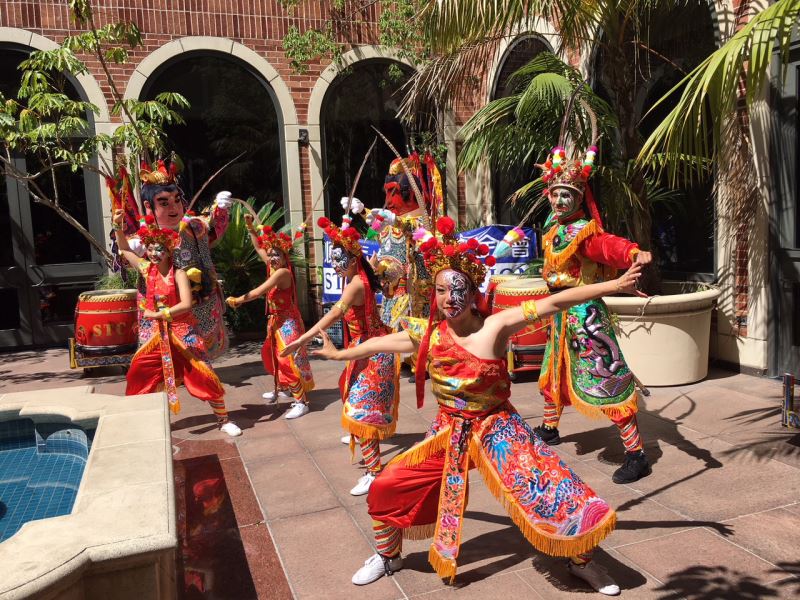 The Taiwan Academy in Los Angeles collaborated with the Fowler Museum at University of California, Los Angeles (UCLA) to launch a face-painting workshop for families on Aug. 5 that featured troupes from the Savannah Technical College (STC) Foundation performing dances from traditional Taiwanese temple parades.

The workshop was held to promote "Tradition in Near Future: Ritual Corporeality in Contemporary Taiwanese Arts," an exhibition highlighting Taiwan's traditional culture and customs from July 21 through Sept. 22 at the Taiwan Academy in LA.

Bold and colorful, face paints are one of the most visually arresting features during Taiwanese temple parades. Dating back to the ancient tradition of facial colorings among warriors, the colors and patterns of face masks were used to scare off enemies. At contemporary temple parades, however, they bear also symbolic meanings by showing the identity, status, and personality of particular characters.

The Aug. 5 workshop at the Fowler Museum at UCLA also introduced LA participants to Taiwan's traditional religious processions ― known as tīn-thâu (陣頭) in the Taiwanese language ― in a clear and understandable manner.

Growing up in Taiwan, Anne Ma (馬淑芬) is the one of the choreographers at STC Foundation, a US-based private and non-profit organization that advocates Asian cultures. Inspired by tīn-thâu traditions, she incorporated contemporary elements into a performance called "Guan Jiang Shou (官將首)," whose dance performers assisted parents and children in experiencing the joy of face paints during the event.

To mark an unforgettable ending for the exhibition, the Taiwan Academy in LA will also be screening "Din Tao: Leader of the Parade (陣頭)" ― a Taiwan film on real-life stories of Taichung’s Chio Tian Folk Drums & Art Troupe (九天民俗技藝團) ― on Sept. 21 to carry forward Taiwan's folklore arts and cultures.