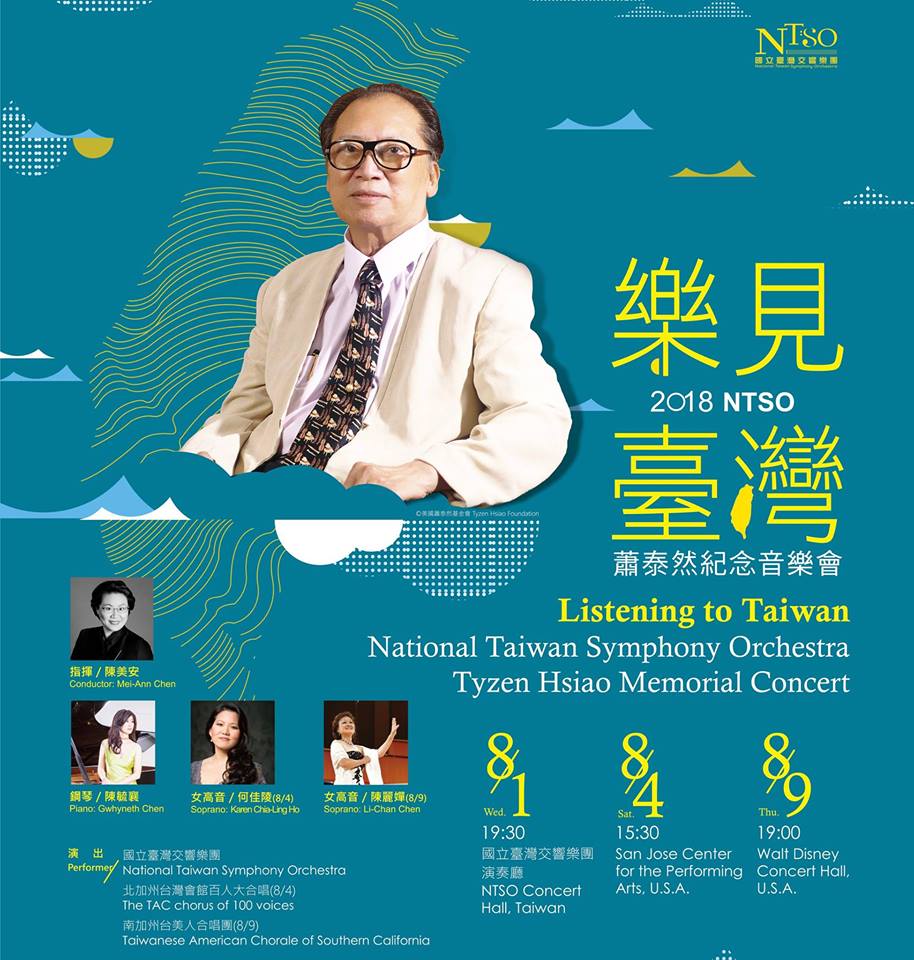 The eponymous concerts featured many of Hsiao's iconic works, which are recognized as some of Taiwan's most elegant and stirring music. The orchestra was led by conductor Chen Mei-ann (陳美安), musical director of the Chicago Sinfonietta, with accompanying music by Taiwanese-American pianist Gwhyneth Chen (陳毓襄).

The first Tyzen Hsiao Memorial Concert unfolded at the Center for the Performing Arts in San Jose on Aug. 4, featuring Taiwanese soprano Karen Chia-ling Ho (何佳陵) and a 100-member-strong choir from the Taiwanese American Center of Northern California (北加州台灣會館), and attracting more than 2,000 audience members.

The impressive performance included Mozart's "Laudate Dominum" and a repertoire of Hsiao's compositions, such as "The Fairest Flower (上美的花)," and "Never Disregard Our Homeland (嘸通嫌台灣)," to showcase the proud voices coming from Taiwan.

NTSO Director Liu Suan-yun (劉玄詠) thanked the Taiwanese American Center of Northern California for their invitation and the Taipei Economic and Cultural Office in San Francisco for their assistance, noting that NTSO finally made their US debut since the orchestra's establishment in 1945.

The program spotlighting Hsiao's famous works, including "March of Democracy (出頭天進行曲)" and "The Angel from Formosa (來自福爾摩沙的天使)," was curated to show the world the gentle side of Taiwan. At the end of the concert, Hsiao's wife, Kao Jen-tzu (高仁慈), also stepped onto the stage and paid tribute to all the participating musicians.

Chen, the conductor for both concerts, noted that listeners are always moved by Hsiao's beautiful and delicate melodies, regardless of their nationalities.

Through two astounding performances, the 2018 Tyzen Hsiao Memorial Concerts commemorated a late maestro and presented the power of Taiwanese music on the world stage.