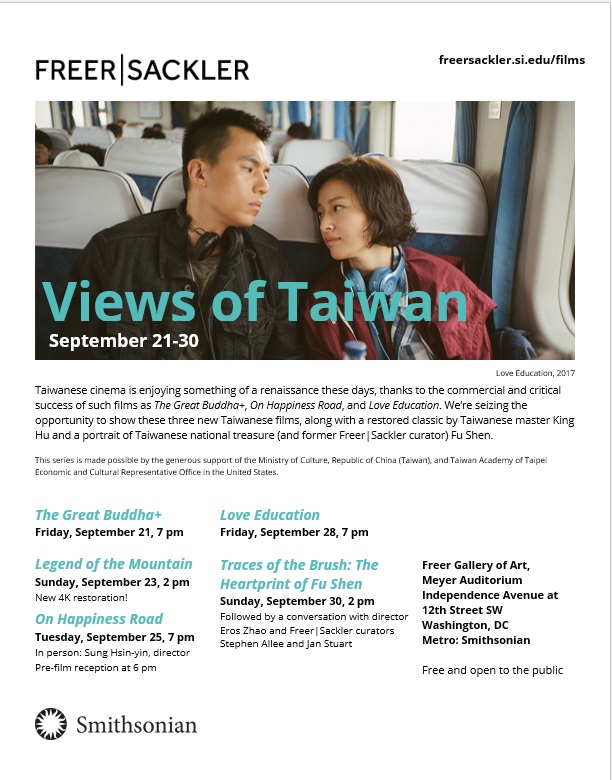 The Smithsonian's Freer and Sackler Galleries screened five contemporary and classic films from Taiwan at its newly renovated Meyer Auditorium from Sept. 21 through 30. The screenings were also accompanied by discussions with select filmmakers in person.

"The Great Buddha +" tells the story of Pickle and Belly Button, two amiable working-class stiffs who make a shocking discovery while going through the dash-cam footage of Pickle's wealthy playboy boss. The proceedings are enlivened by a wry voiceover by filmmaker Huang Hsin-yao himself that revels in obscene Taiwanese slang.

"Legend of the Mountains" follows a traveling scholar who loses his way in the mountains as he focuses on translating a Buddhist sutra. In this reflective blend of myth and history that characterizes the works of wuxia auteur King Hu, time and space collapse as the scholar encounters ghostly visitations amid a haunting fantasia of color, light, and landscape.

"On Happiness Road" is a semi-autobiographical animated film that covers decades of Taiwanese history through the eyes of an expatriate. Director Sung Hsin-yin's return home following her grandmother's death prompts bittersweet nostalgia and self-reflection.

"Love Education" is directed by legendary Taiwanese filmmaker Sylvia Chang, who plays a dying woman in her latest release. This warm family drama examines Chinese history and tradition through the perspectives of three generations of women.

"Traces of the Brush: The Heartprint of Fu Shen" places the spotlight on Fu Shen, a late Taiwanese scholar, artist, educator, and one of the most distinguished traditional connoisseurs of Chinese painting. The documentary explores Fu's extraordinary career, including his time as a curator at Freer and Sackler Galleries from 1979 to 1994.

Riding on the back of Taiwan's recent cinematic renaissance, the "Views of Taiwan" program offered a rare opportunity for folks from the greater Washington, DC metropolitan area to see the latest Taiwanese productions and Taiwan's dedicated efforts in preserving the nation's audiovisual heritage.