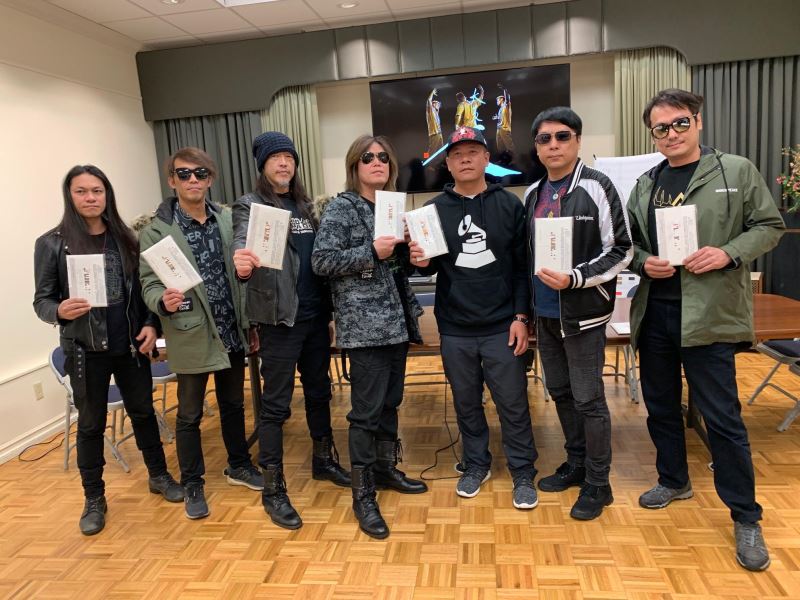 The Taiwan Academy in Los Angeles hosted a press conference on Feb. 8 to welcome designer Xiao Qing-yang (蕭青陽) to the West Coast and drum up support for his fifth Grammy nomination for best recording package. He will attend the awards ceremony at the Staples Center on Feb. 10.

Xiao, 53, became the first Asian graphic designer to earn a Grammy nomination for best recording package in 2005 for "The Wandering Accordion (飄浮手風琴)" by composer Wang Yan-meng (王雁盟). He was nominated once again in 2019 for "The Offering (祭)" by The Chairman (董事長樂團) band.

Since 1986, he has designed more than 1,000 album packages for Asian pop and indie singers and bands. In addition to album design, his works span book packaging, product design, and installation art. He has previously served as a judge for the Grammy Awards, Independent Music Awards, and Japan's Unknown Asia.

Yang Ting-chen (楊婷媜), director of the Taiwan Academy in Los Angeles, pointed out that Xiao has already earned the admiration of the Taiwanese public with his consistent high-quality works, and this led to his appointment as the inaugural artistic director of the Ministry of Culture's Taiwan Comic Base, a four-storey building hailed as the nation's first-ever comics headquarters.

Director Yang then congratulated Xiao on his fifth Grammy nomination, noting that the distinction and his stellar portfolio have also drawn global attention to Taiwan's unique culture and aesthetics through a shared love for good design.

Recalling making a promise to design the new album by The Chairman three years ago, Xiao explained that he attended many temple processions to experience the true roots of Taiwanese folk culture, and eventually drew inspiration from the gold-powdered ghost money to illustrate the cover of "The Offering."

Xiao was accompanied by The Chairman at the press conference, as the rock band was subsidized by the Ministry of Culture to attend the Grammy Awards on March 10. The Chairman will hold a concert at the Taiwan Center in Rosemead on March 9 to celebrate the Lunar New Year with the greater Chinese community in Los Angeles before the big reveal.