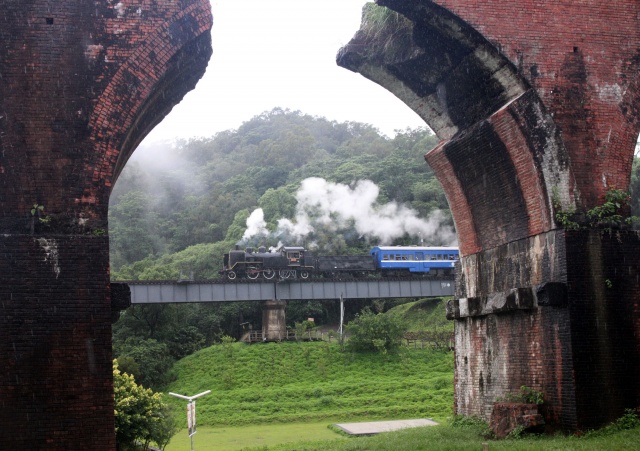 The 15.9-km "Old Mountain Line Railway,” linking Miaoli's mountainous Sanyi township and Houli in Taichung, was part of the main railway line in western Taiwan. The railway line was completed in 1908 by the Japanese government when it ruled Taiwan. After a 12-year hiatus, the line resumed temporary operations for three months in 2010 as part of a special tourism program.

The railway used to be a major transportation artery for shipping coal, timber and fruits from Miaoli to other parts of Taiwan.

The steepest and most winding section on the Taiwan Railway's western line was a great challenge to construction workers. It also had the longest tunnel and steel bridge. Because of the steep slope, the railway has a fork to allow the train to go upward and then backward when losing momentum.

One of the popular attractions is the remains of the brick-made Yutengping Bridge, also known as the Longteng Bridge, which collapsed in a 1935 earthquake. The bridge's arches were gone, leaving only the red pylons of a historical architecture, which was once described as "a masterpiece of railway architecture.”

The Daan Creek Bridge, a 637.39-meter-long steel beam bridge, is one of four bridges on the line. Another valuable heritage on the railway is the Shengxing Station, built completely with China fir wood in 1906, which survived the 1935 quake and remains on display for visitors to see. At an altitude of 402 meters, the station is the oldest wooden train station in Taiwan.