'It's Great to be a Female Harvester by the Sea!' 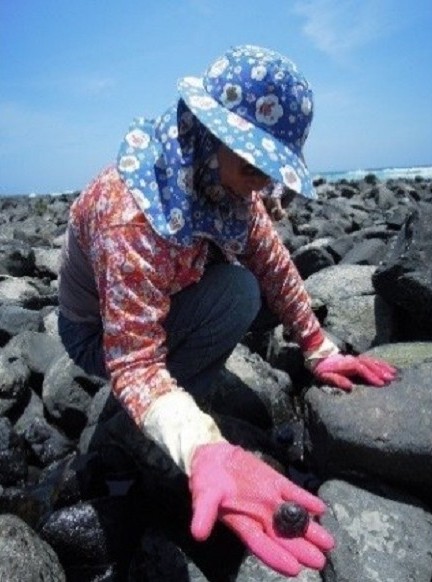 ‘It's Great to be a Female Harvester by the Sea!'

I like the sea very much! I have been swimming since I was 8 or 9 years old, and I loved to hide in the depths and compete with my friends to see who can hold their breath for the longest time. I had followed my mother to the seaside since I was 12 or 13, fascinated by watching her pick conches, sea urchins, and laver. This is how I fell in love with the lifestyle of a female shellfish and seaweed harvester…

Daring to Swim Alone by Night

I could stay in the sea for hours without a swimming partner and still not be bored. I also dared to jump into the sea for some adventures even at night.

A female harvester does not use any tools. When I was young, I was really good because I could collect 5 to 6 kilograms of clams with just my bare hands, which was more than anyone else got then!

Sometimes I collected a 100 kilograms of starfish and sea urchins in a single day, which I exchanged for a lot of money. At that time one kilogram of seafood could be sold for NT$2.50 and I could happily earn a few hundred [New Taiwan] dollars with such a large harvest.

I loved working as a female diver, because I was able to collect seafood to take home to eat and also sell some to supplement my family's income. It was a great work experience!

A Scar I Carried for Life

I still remember that in a hot summer day when I was a small girl, I begged to follow the adults to work at the seaside but was told to first prepare feedfor the pigs before going out. Because of my impatience, I cut a big hole in my left index finger and it bled profusely on the spot.

Since there were no doctors on our remote island at that time, I endured the pain and ran, while weeping, to our neighbors to ask for electrical black tape to bandage the cut. The pain in hand had made me cry bitterly, and the scar left by the cut on my finger is still visible today…

Watch the Waves and Practice Self-Restraint

There are abundant natural resources all year round in the Cimei Twin Hearts Stone Weir in Penghu County. During summertime, you can pick conches and sea urchins and catch small crabs. Ox-palate nerites, however, will only appear when it is cloudy, and I know I can pick up many of them whenever the sky is clouded over.

If you want to catch crabs, you have to look for them where there is a large gap between high and low tide, because the meat of the crabs hiding there is sweet. In winter you can pick seaweed, laver, coral-shaped seaweed, and sea anemone…

Sea anemones in Penghu are delicious, because they are crispy and fragrant when stir-fried and can be cooked with rice noodles. So, they are the best thing in the sea! Agar made from red algae is also good because it contains calcium and can be made into cold drinks.

Picking laver is in fact very dangerous. You have to know how to read the waves and not be greedy because nothing will be left if your harvest is swept away by the waves.

The best seaweed-picking spot is in a bay commonly known as the "Flow of Ten” in Cimei, but sea conditions there are the most dangerous and those who are not good swimmers can be swallowed easily by the waves.

There was an older brother in my neighborhood who was agile and good at picking laver, but too greedy. All the laver he picked one day was swept away because he forgot to pay attention to the sea. Since I played there as a kid, I understand the waves very well and I know I must leave when I notice that the waves are not right.

The Sea is Alive, Undulating

After getting married, I worked in Kaohsiung for a period of time in order to raise my five kids. I then returned home to plant vegetables in Penghu when all my children were grown up and got married. I also went back to the sea to hunt for treasures when I was over 50 years of age. Now I am a 70-year-old woman, even though I still want to go to diving, I don't have thephysical strength to do so.

I still like the sea very much! As a matter of fact, hot summer waves have a little coolness in them and the waves in winter are warm. The most beautiful thing in the sea is the seascape. I think the mountain scenery is dead and immutable, but the seascape is alive. When you swim in the sea and look down from above, the swaying seaweeds are more beautiful than trees on the land; the swaying waves are even more beautiful, and your state of mind will gradually expand as you watch the continuous motion.