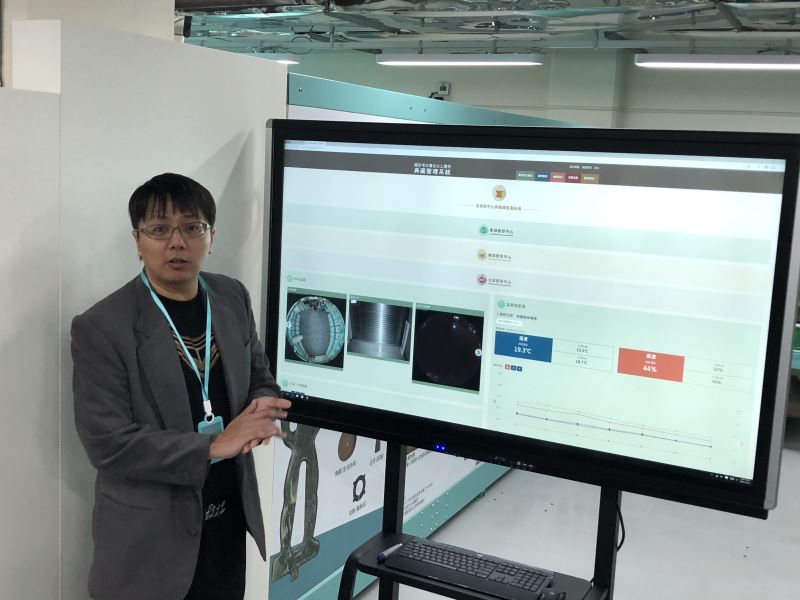 In a departure from traditional archival practices, the National Museum of Prehistory (NMP) in Taitung County has become an adopter of wireless environmental sensors during the construction of its newly launched heritage preservation center to give prehistoric artifacts a better home.

As the first smart archive for archaeological relics in Taiwan, the center has installed a system designed to maintain temperature and humidity to protect delicate items. The system is equipped with facial recognition technology, radio-frequency identification (RFID) that can automatically detect environmental changes, temperature and humidity monitors, and surround-view cameras.

The automatic monitoring system has not only replaced many manual tasks and trivial paperwork, but is also boosting the center's operational efficiency and data accuracy, Yeh Chang-keng (葉長庚), a NMP research assistant, said.

With surround-view cameras and temperature and humidity monitors in place, "you can fully grasp any changes in the center, [especially] when anything unexpected takes place," for immediate notifications of such incidents will be sent to the center’s administrator, Yeh explained.

The newly launched center is part of the Bureau of Cultural Heritage's recent efforts to upgrade the archives of archeological relics nationwide and grant greater public access to the physical remnants of former cultural landscapes.

To this end, the Ministry of Culture has commissioned the National Museum of Prehistory to implement the "National Management Project for Artifacts from Archaeological Sites (NMPAAS, 國家考古遺址出土遺物典藏計畫)," which includes the establishment of four collection centers respectively in northern, central, eastern, and southern Taiwan.

The Taitung-based NMPAAS Eastern Collection Center (國家考古遺址東部保管中心) was up and running on Dec. 16 as the first of its kind to be launched under the project. The opening tour was joined by representatives from National Taiwan University's Department of Anthropology, the Cultural Affairs Bureau of Yilan County, and the Taitung County Cultural Affairs Department.

Speaking at the opening ceremony, NMP Director Wang Chang-hua (王長華) began by explaining how the extraordinary discoveries of new archaeological sites such as Jiuxianglan (舊香蘭), a coastal site in Taitung that contains artifacts from the Iron Age, have shed light on Taiwan's prehistoric era.

In the future, Wang said, NMP will work closely with archaeological research teams and academic units from across the nation, and utilize the full potential of digital technologies for twin goals — to conduct research and to offer greater public access to prehistoric objects and sites.

More information on Taiwan's 10 national archaeological sites can be found at https://nhsrc.nmp.gov.tw/Map.