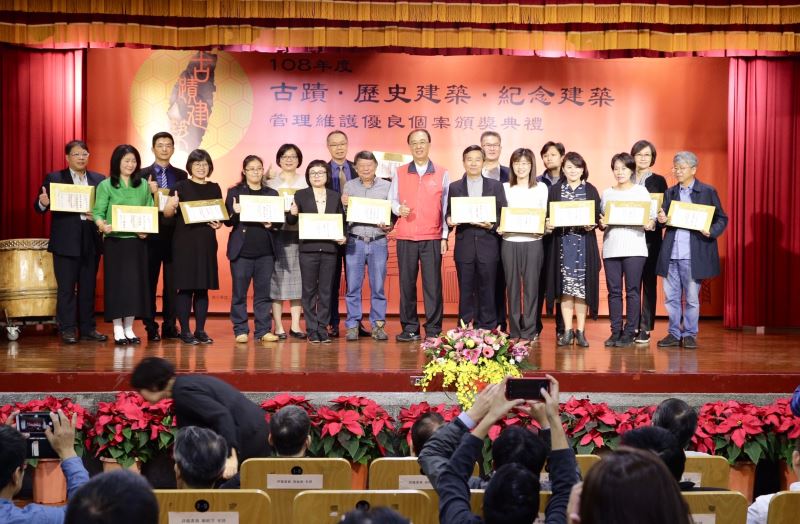 As part of the comprehensive efforts that the Ministry of Culture has undertaken to safeguard heritage sites nationwide, nine historic sites chosen from 19 finalists were granted awards acknowledging their maintenance and preservation endeavors at Taichung's Cultural Heritage Park on Dec. 18.

Winners include the Beitou Museum, a Japanese-style building that was once the largest bathhouse in East Asia; the Chiayi City Historical Relic Museum, an old Japanese Shinto shrine in the southern city of Chiayi; and the Six Section Grand Abode of Huang Hsuan-hsien, a centuries-old residence on the outlying Kinmen County. Altogether, the nine laureates are recognized as successful preservation models that can inspire the multitude of historic sites in the country to follow suit.

Speaking at the awards ceremony, Shy Gwo-long (施國隆), director-general of the Ministry's Bureau of Cultural Heritage, said only through the solid implementation of such management and maintenance plans will the lifespan of the nation's heritage sites be prolonged, and "this is a mission that requires public-private sector partnership."

While the Ministry has been optimizing Taiwan's legal framework for heritage preservation, a system evaluating the state of public historic sites was introduced in 2013, and applied to private sites two years later. It is hoped that the evaluation system will mature into a permanent management and maintenance mechanism, Shy said.

As an incentive to bolster the preservation of more than 2,000 historic buildings and monuments in Taiwan, a subsidy program will be launched in the near future for owners and operators of well-preserved heritage sites to observe conservation work abroad, the director-general added.

Apart from the awards ceremony, an exhibition that seeks to raise awareness on the importance of cultural heritage as a common and shared asset kicked off concurrently at the Taichung park, showcasing the efforts invested in maintenance work of the ten runners-up, along with the nine winners. The exhibition will run through Nov. 30, 2020.