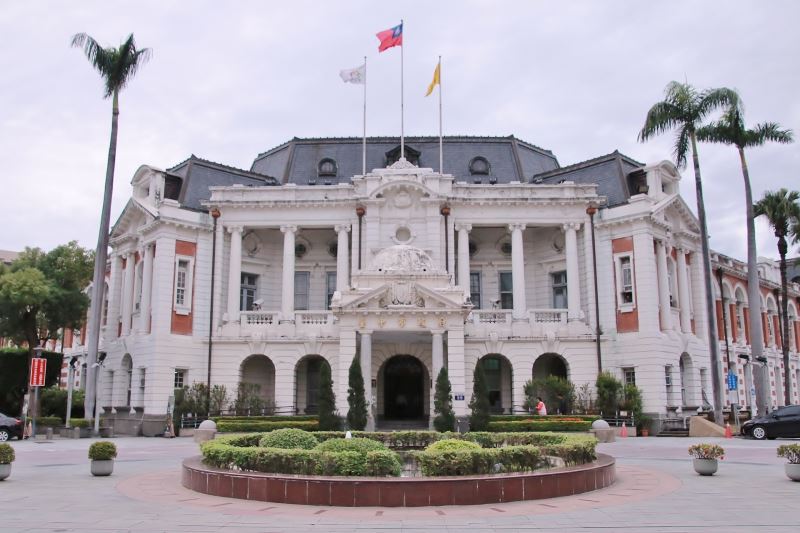 The Taichung City Government announced its opposition on Feb. 11 against plans to transform Taichung Prefectural Hall (臺中州廳) and its surrounding sites into national exhibition venues with a focus on Taiwanese art history, for which the Ministry of Culture expressed deep regret and is now in search of other venues to fulfill the nation's cultural and archival needs.

The Ministry and the Taichung City Government failed to reach a consensus on the use of the Taichung Prefectural Hall in two meetings, despite thorough plans formulated by the Ministry were put forth in 2018 on the revitalization and reuse of the national historic monument. The new government spoke against the plans on Feb. 11, axing the former government team's decision to work with the Ministry.

The revitalization plans go back to 2017 when the Taichung City Government proposed the "Reconstruction of Taichung City's Cultural History (台中文化城中城歷史空間再造)" project — a renovation-and-revitalization initiative encompassing the Taichung Prefectural Hall, Datun County Office, the complex of buildings affiliated with the hall, and the surrounding space.

Minister of Culture Cheng Li-chiun and former Taichung City Government Mayor Lin Chia-lung (林佳龍) signed a letter of cooperation in November 2018, announcing the Ministry's plans to work with Taichung City Government on the creation of the "NTMoFA Taichung Prefectural Hall Park (國美館臺中州廳園區)" that would connect the hall, the old city council building, and their environs.

As part of the Ministry's efforts to reconstruct Taiwan's art history, the original plans would have the hall dedicated to modern Taiwanese art exhibitions, while the former city council building would have housed a restoration center and a national arts archive.

A budget of NT$580 million was granted from the central government's Forward-looking Infrastructure Development Program (FLIDP) in 2019 for the project, while additional funds from the "Reconstruction of Taiwan's Art History" project under FLIDP as well as the expansion project for National Taiwan Museum of Fine Arts (NTMoFA) were earmarked for the NTMoFA Taichung Prefectural Hall Park, too.

After the Ministry and the city government inked the letter of intent, NTMoFA and Taichung's Cultural Affairs Bureau began to exchange views on specific implementation details while drawing up contracts to finalize the agreement. The project was halted on Feb. 11 by Taichung Mayor Lu Shiow-yen (盧秀燕).

Explaining the feasibility of the project, the Ministry said given how the prefectural hall in Tainan is now the National Museum of Taiwan Literature while serving as a facility that preserves relics of great significance, there were no foreseeable technical problems in transforming the Taichung Prefectural Hall into a venue for conservation and exhibition.

In addition, the Ministry said, the idea of using the Taichung hall to house a national cultural program had received a warm welcome from local communities when Taiwan's second largest city geared up to revitalize its old metropolitan district.

Though the agreed cooperation between the Ministry and the former Taichung City Government has now been scrapped, the implementation of the "Reconstruction of Taichung City's Cultural History" project will carry on as planned as its budget was approved by the central government in 2017.

The Taichung Prefectural Hall, which was built during Taiwan's period of Japanese colonial rule, was put to use at the same time as the prefectural halls in Taipei (now the Control Yuan building) and Tainan (now the National Museum of Taiwan Literature). Together, the trio became icons of major official architecture from that period, and all three have played important roles in Taiwan's history.

In related development, the paintings and drawing relics that have been donated to the Ministry by the California-based Sun Ten Museum as well as by the family members of late painter Lin Yu-shan (林玉山) are currently being preserved and restored by NTMoFA. The artworks will be on view this year at the Taichung-based museum and be exhibited with other NTMoFA collections at venues dedicated to Taiwanese art history.

As one of the Ministry's cornerstone policies, the "Reconstruction of Taiwan's Art History" project seeks to trace the lineage of Taiwanese art history and enhance the international interconnectivity of Taiwanese art.

To this end, efforts including art preservation, historical document collection, art research, and careful interpretations will be made. The Ministry will also upgrade related equipment and facilities, invest in human capital, and refurbish art venues.

Considering central Taiwan is where the first Taiwanese art movement began, and that Taichung Prefectural Hall was listed as one of the highest-level districts during Japanese rule, the historic site is uniquely fit to be integrated with national cultural programs. With the central government shouldering the costs for restoration and state-level agencies responsible for its operations, NTMoFA Taichung Prefectural Hall Park would have been conducive to the revival of the old city district.