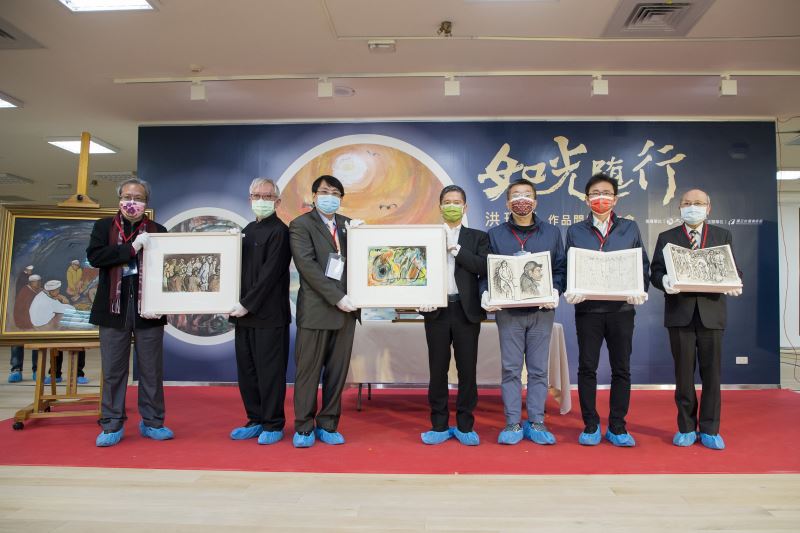 The National Taiwan Museum of Fine Arts (NTMFA) in Taichung on Feb. 1 held an unboxing ceremony for the paintings by the late Taiwanese artist Hung Rui-lin (洪瑞麟). The artist's eldest son Hung Jun-xiong (洪鈞雄) last year donated a great collection of the artist's works to the Ministry of Culture.

Born in Taipei in 1912, Hung received arts education in Taiwan and Japan in the 1920s and 1930s, and since the early 1930s his works were shown in numerous exhibitions in Taiwan, Japan and the United States, even after his passing in 1996.

Those present at the ceremony included Minister of Culture Lee Yung-te, Deputy Legislative Speaker Tsai Chi-chang (蔡其昌), Director of the NTMFA Liang Yung-fei (梁永斐), and National Cheng Kung University professor Hsiao Chong-ray (蕭瓊瑞), who was commissioned by the Ministry of Culture and the NTMFA to research on and catalogue the donated artworks which were preserved by Hung's family in the United States.

The donated artworks, including 1496 paintings and 40 sketchbooks, were delivered to Taiwan at the end of last year, and NTMFA is caring for them.

Hung started to learn painting in 1927 when he enrolled in a private art institute funded by renowned painter Ni Chiang-huai (倪蔣懷) and studied under the guidance of Japanese artist Ishikawa Kinichiro (石川欽一郎). In 1930, he traveled to Japan for advanced studies at Tokyo-based Teikoku Art School, now known as Musashino Art University.

Spanning four periods, the donated artworks include sketches, imitating those by Michelangelo, produced under the guidance of Ishikawa Kinichiro , sketches created during his time in Japan, his most renowned "miners series," as well as abstract artworks yet to be shown to the public.

Hung had worked at the Jui-fang Coal Mining Company for long years, and he found inspiration from the life in a mining community. His drawings revolving around the lives of miners had become his most iconic works.

Hung once alluded to his drawings as a miner's diary as well as a reflection on himself. He tended to employ rougher drawing techniques during the time at the coalmines, using only a few strokes to bring out the characteristics and spirit of the coal miners.

Minister Lee indicated that it is heartening to be able to receive the works of Hung Rui-lin, while expressing his gratefulness that Hung's eldest son had cared for the cultural assets of the country for long years and generously donated to the NTMFA.