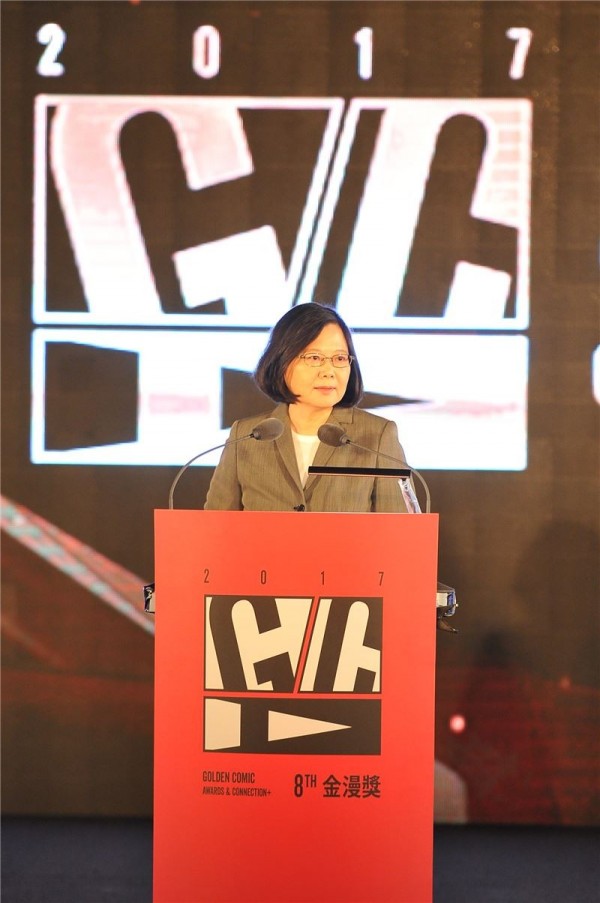 President Tsai Ing-wen attended the 8th Golden Comic Awards ceremony held at Taipei New Horizon on Sept. 12 to congratulate the winners and explain her government's policy on comics and animation.

President Tsai noted in her speech that she met with cartoonist BIGUN, who spoke to her in 2015 about his concerns on Taiwan's environment for young artists hoping to create comics. Thus, she became determined to devote more resources to comics and animation.

Since President Tsai took office, she has instructed the Ministry of Culture to carry out six major policies for comics and animation, including to prepare a better environment for creation and provide diverse channels for publication; establish a comics information platform; broaden support for anime, comics, and gaming; and establish a national comics museum.

Culture Minister Cheng Li-chiun noted that the goal of the Golden Comic Awards is to polish Taiwan's comic brands. With the President attending the ceremony for the first time, it symbolizes the government's full support for comics, Cheng added.

It is also the first time that the government has decided to include anime, comics, and gaming in the Forward-looking Infrastructure Development Program, along with a special budget to strengthen cross-field integration, stated the Minister.

In addition, the Ministry of Culture will hold a commemorative exhibition next year to pay homage to Chen Uen (鄭問), a late cartoon artist who had dedicated his life to promoting Taiwan's original comics and Chinese heritage. The upcoming event in 2018 will be the first National Palace Museum exhibition to ever feature comics.

This year, the Special Contribution Award goes to prominent cartoon artist Hsu Mao-sung (許貿淞). Hsu Chi-fen (許綺芬) accepted the award from the President on behalf of her father, and introduced her father's works and ideas to the President.

In Hsu's career that spanned over 50 years, his persistence in creating good comics gave way to sensational wuxia comics in the 1960s. He had also established a comics magazine and cultivated many young artists.

According to Hsu Chi-fen, her father said that he has lived his life with no regrets upon learning of his inclusion to the list of award winners, and only hoped that Taiwan will continue creating more comics that present Taiwan's culture and style.

One of the top winners this year is artist Ruan Guang-min(阮光民), who is known for his heart-warming comics for young adult readers. He garnered the Comic of the Year Award for his latest work "Yong-Jiu Grocery Store (用九柑仔店),” a comic that brings out nostalgia and heartfelt emotions with stories inspired by his own childhood memories.

The awards ceremony was joined by Wang Shau-di (王小棣), producer of the Qseries TV drama, to present an award for interdisciplinary works. Wang encouraged comic artists to channel the soft power of Taiwan through original comics.

Lin Zheng-de (林政德), author of comic "Young Guns,” also returned to Taiwan to attend the ceremony and share his experience of working in Shanghai as a manga artist.

To strengthen and expand Taiwan's comic prowess, the Ministry of Culture has amassed resources and taken measures to enhance the overall industry, cultivate talented artists, promote trade and copyright in comics, and collaborate with international art villages and publishers.