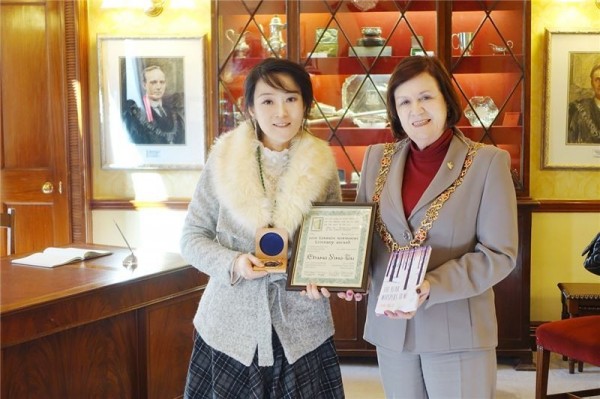 Taiwanese novelist Chang Ying-tai (張瀛太) was named the 2015 recipient of the Lennox Robinson Literary Award, an annual literature award based in Ireland, earlier this March.

Chang, 50, is an award-winning writer and humanities professor at the National Taiwan University of Science and Technology. Her work encompasses novels, short stories, and film and theatrical scripts, a majority of which are regularly named the Best Taiwanese Fiction at the Frankfurt Book Fair.

Billy O'Callaghan, co-founder of the Lennox Robinson Literary Festival, was impressed by Chang's short story recital at an international conference last year, and nominated her for the 2015 award. The judge panel subsequently found her imaginative abilities and flair to be in line with the creative spirit of the late Lennox Robinson.

Esme Stuart Lennox Robinson (1886 - 1958) was an Irish playwright and poet who is now recognized as one of the most versatile realists of the Irish Literary Revival. He also served as long-time manager and producer of Abbey Theatre, the national theatre of Ireland. The Lennox Robinson Literary Festival was established in 2014 by his hometown, Douglas Village in Cork, to honor the grand old man of Irish theatre.

At the awards ceremony held at St. Luke's Church of Ireland, a centennial cultural center in Cork, Chang read aloud the first passage from the newly released English edition of her short novel "The Bear Whispers to Me,” using aboriginal praise songs and mimicking bird cries to present the transient nature of childhood and time.

A video of her recital can be found here.