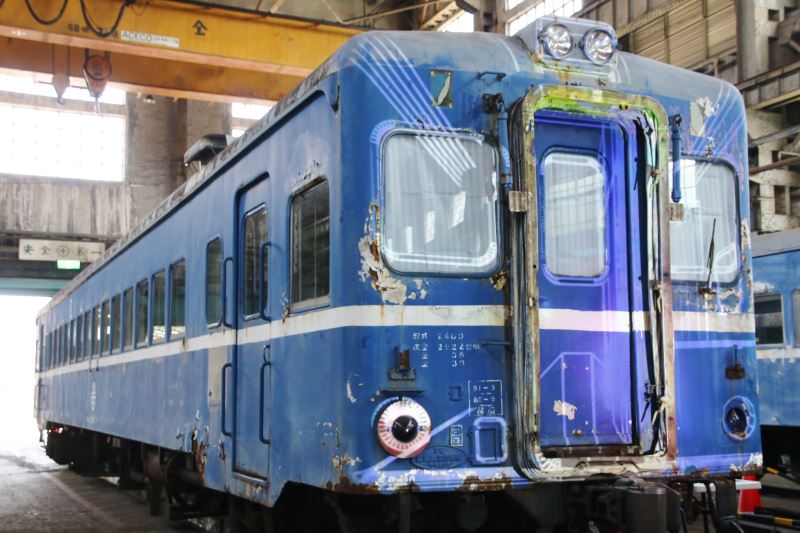 Four blue diesel trains from the 1950s — the last of their kind in the Taiwan Railway Administration's collection — have been successfully shipped to the Taipei Railway Workshop on June 9, where they will undergo renovations and greet visitors as part of Taiwan's upcoming National Railway Museum.

Numbering DR2012, DR2203, DR2303, and DR2404, the four diesel railcars were sandwiched between the TRA's Juguang Express and towed from Taitung Railway Depot to Keelung's Qidu Marshalling Yard. They were then transferred to the Taipei Railway Workshop by highway.

Once affectionately known as "Baby Blue," the DR train models were featured prominently in auteur Hou Hsiao-hsien's 1986 classic "Dust in the Wind." They were originally imported from Japan during the colonial era as part of mass industrialization and but were eventually grounded by the lack of fuel during World War II.

They were retrofitted and brought back into operation by the 1950s as part of the government's austerity measures, serving branch lines such as Pingxi Line in New Taipei, Neiwan Line in Hsinchu, and Jiji Line in Nantou. Upon the decommissioning of the series in 1999, however, only four remain intact today.

Minister of Culture Cheng Li-chiun and Minister of Transportation and Communications Ho Chen-tan (賀陳旦) signed a memorandum of understanding on June 9 to join resources and preserve the last four non-dismantled diesel railcars, now promoted to the ranks of "Grandpa Blue."

The signing ceremony was attended by musician Chen Ming-chang (陳明章), who composed the original soundtrack for Hou's "Dust in the Wind" with a NT$600 guitar back in the 1980s.

The Ministry of Culture is also holding an open call for old photographs of the DR2100 – DR2400 diesel railcar series. Winning entries will be displayed alongside the decommissioned trains when the National Railway Museum opens in 2024.