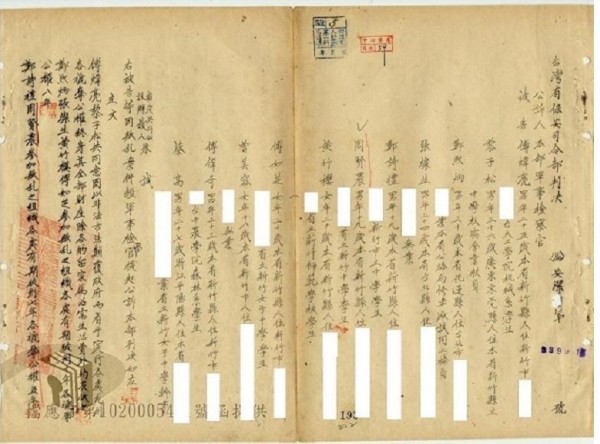 On May 28, 1998, the Legislative Yuan enacted the Compensation Act for Wrongful Trials on Charges of Sedition and Espionage during the Martial Law Period. In line with this, the Executive Yuan established the Improper Martial Law Period Insurgency and Espionage Convictions Compensation Foundation (or the "Compensation Foundation" for short), which is responsible for addressing compensation, restoration of reputation, and other issues pertaining to political victims of Taiwan's martial law era. On March 8, 2014, the Compensation Foundation completed its 15-year mission by compiling 10,067 dossiers on compensation cases. These dossiers not only represent the government's objective of compensating White Terror victims, but are also invaluable documentation of the history and development of human rights in Taiwan.

On the eve of the conclusion of the Compensation Foundation's mission, the Executive Yuan coordinated with the Ministry of Culture and Ministry of National Defense to transfer the dossiers to the Preparatory Office of the National Human Rights Museum (predecessor to the National Human Rights Museum that opened in May 2018) and make plans for their future use and methods for making them public. Since 2014, 479 digital files of the Foundation's verdicts have been opened to public inquiries and usage applications, and since 2016, victims and their families have been able to apply for access to these dossiers.

In December 2017, the Act on Promoting Transitional Justice passed its third reading in the Legislative Yuan and was enacted by President Tsai Ing-wen. The opening up of political archives has become the most anticipated task among both scholars and political victims (and their families); in order to facilitate the process as quickly as possible, in early 2018 the National Human Rights Museum consulted with victims; scholars of history, law, and politics; and the relevant ministries, and after taking into consideration existing laws and regulations, developed a system by which members of the public may check the catalogue of dossiers and request access from the Museum.

As the dossiers contain personal information, currently any files released will be partially redacted to protect that information. The first phase of releases will prioritize dossiers on victims of execution or death sentences, as well as on interviews given to the Museum by the victims or their friends and family. The hope is that as users read these dossiers, they will be able to compare and contrast the oral histories of victims, engaging in a dialogue of sorts between the dossiers and recorded histories to gain greater understanding of that era.

For information on the Museum, White Terror victims, and the martial law period, please visit the National Human Rights Museum website at https://en.nhrm.gov.tw/.