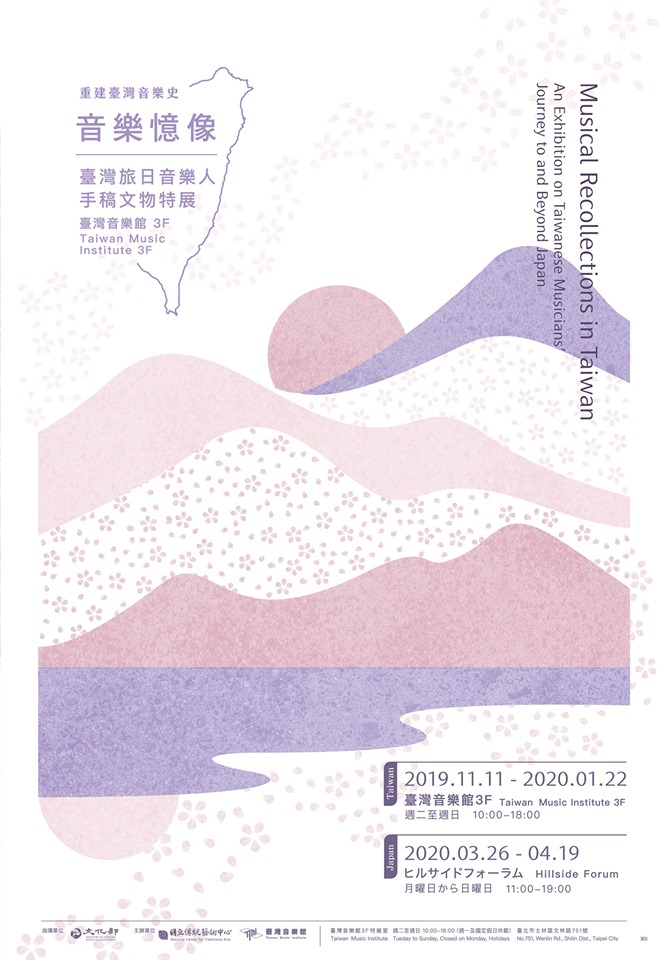 "Musical Recollections in Taiwan," an exhibition on historic Taiwanese musicians who studied Japan and their musical legacies, will be held in Taipei from Nov. 11, 2019 through Jan. 22, 2020. Event organizer and host venue, Taiwan Music Institute, is housed in the Taiwan Traditional Theatre Center building in Shilin District.

Taiwanese music has a special connection to Japanese culture, and this exhibit will showcase the manuscripts, recordings, and relics of those who pursued their dreams in Japan, and introduce studies on Taiwanese indigenous music conducted during the early half of the 1900s. Combined with the use of contemporary technology and creative displays, the exhibition aims to present the diverse music culture of Taiwan.

Deputy Minister of Culture Hsiao Tsung-huang (蕭宗煌) pointed out that back in the early 1900s, Taiwan was lacking in formal music education opportunities. For example, Chang Fu-hsing (張福興) received a scholarship to attend Tokyo College of Music in 1906, becoming the first musician in Taiwan to receive a Western music education. After graduating, he returned to Taiwan to teach music and began documenting Taiwanese music. In 1922, with sponsorship by the Taiwan Provincial Education Association, Chang went to the Sun Moon Lake area to collect Taiwanese indigenous music and compiled "Songs of the Indigenous from Shuishe (水社化蕃之歌)," becoming the earliest Taiwanese transcriber of such indigenous music.

Additionally, the exhibition will also follow the music journeys of more current musicians and performers such as Jimmy Lin (林沖), the first Taiwanese to perform at the Tokyo Takarazuka Theater; Teresa Teng (鄧麗君), a Taiwanese pop legend who was very popular across Asia; and Anna Azusa Fujita (藤田梓, also credited as Anna Teng), a Japanese pianist who is devoted to music education and the promotion of piano in Taiwan.

National Center for Traditional Arts (NCFTA) Director Chen Chi-ming (陳濟民) explained that Taiwanese musicians created many classic songs during this period that have continued to be covered by current pop singers, such as Deng's "Longing for Spring Breeze (望春風)" and "Rainy Night Flower (雨夜花)." Even well-known Japanese musicians and troupes such as Yo Hitoto (一青窕), Rimi Natsukawa (夏川里美), and Takarasuka Revue (寶塚歌劇團) have covered these same songs when performing in Taiwan, he added.

"Musical Recollections in Taiwan" will help exhibition-goers relive the journeys of these musicians, as well as their passion towards music, hardships of being away from home, rapport among each other, and influence on today's music scene in Taiwan.

At the center of the exhibition venue will be a Japanese-style musician’s study, complete with music, photos, and reading materials for the audience to immerse themselves in a moment from the past.

After the Taipei showing ends in January 2020, the exhibition will travel to Japan and be displayed at Hillside Forum in Shibuya, Tokyo from March 26 through April 19, 2020.

‘Musical Recollections in Taiwan: An Exhibition on Taiwanese Musicians’ Journey To and Beyond Japan’