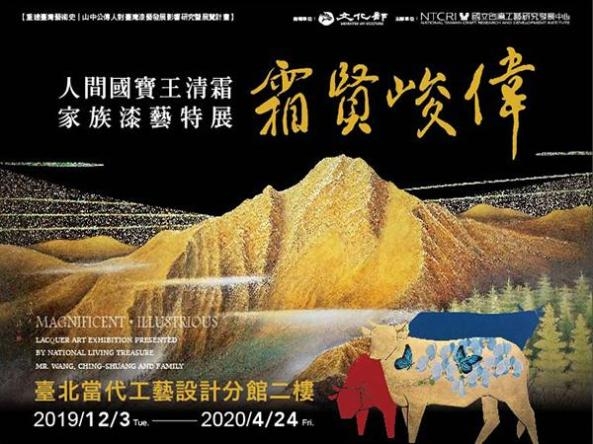 Works by Wang Ching-shuang (王清霜), a renowned painter who has immersed himself in the lacquer arts throughout his life, and his descendants will be on view in an exhibition that consists of a century-spanning exchange of forms, stories, and values at the Taipei branch of the National Taiwan Craft Research and Development Institute (NTCRI) from Dec. 3, 2019 through April 24, 2020.

Born in 1922, Wang received his training in Taiwan from late Japanese lacquer master Yamanaka Tadasu (山中公) at the age of fifteen and later traveled to Tokyo to study the art of making lacquerware. The Taichung native, who is now 97 years old, never stops working. Moreover, his painting "Two Birds on a Bombax Ceiba Tree (雙鳥木棉花)" has been named as one of the treasures of NTCRI, the nation's premier crafts agency, this year.

"Magnificent & Illustrious — Lacquer Art Exhibition Presented by National Living Treasure Mr. Wang Ching-shuang and Family" will not only showcase 48 artworks respectively made by Wang and his sons and grandchildren, for the earlier pieces Wang made when he produced lacquerware for the commercial market will also be on display, offering a glimpse of the artisan's endeavor to provide all members of the general public with exquisite lacquerware.

Describing Wang as a craft artist, an educator, a scientist, and an industrialist, Minister of Culture Cheng Li-chiun said the master artisan has left a significant mark on Taiwan's history of craftsmanship. She added that the Wang family showcase will be followed by a series of exhibitions that explore the development of folk crafts in Taiwan.

In explaining the prominence of Wang's contributions, Minister Cheng pointed out how Wang co-founded the Nantou County Craft Research Class (南投縣工藝研究班) with the late painter and arts educator Yen Shui-long (顏水龍) in 1954. Their humble workshop became the predecessor of NTCRI.

Echoing the Minister, Premier Su Tseng-chang (蘇貞昌) said at the exhibition's opening ceremony that a lacquer painting by Wang Chun-wei (王峻偉), Wang's grandson, was gifted to King Mswati III of eSwatini (formerly known as Swaziland) and the royal family during President Tsai Ing-wen's state visit in 2018.

Speaking to his descendants, Wang encouraged them to be bold and strive for the excellence of lacquer arts in Taiwan, and "don't let the fear of failure hold you back." When all else fails, Wang said, one should turn to traditional techniques for answers.