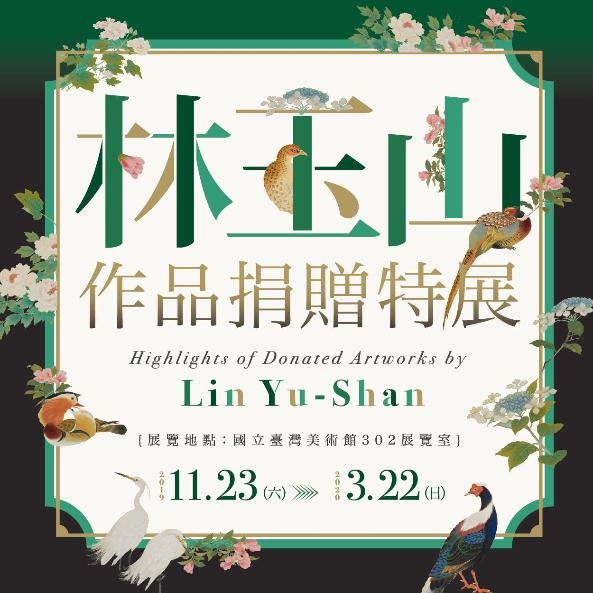 An exhibition showcasing late painter Lin Yu-shan's (林玉山) donated artworks will run from Nov. 23, 2019 through March 22, 2020 at the National Taiwan Museum of Fine Arts. Comprising drawings and manuscripts previously donated by Lin before his passing and now by his family members, the selection at the Taichung-based institution was curated to celebrate the oeuvre and life of the influential artist.

From Lin's first tiger painting, "Fierce Tiger Descending from the Mountain (下山猛虎)" of 1923, to his last piece, a cajeput tree illustration created in 2004, the exhibition offers an opportunity to explore how the Chiayi native's creations reflect Taiwan's colonial past while seeking to preserve the historical significance of the Taiwanese postwar period.

"Highlights of Donated Artworks by Lin Yu-Shan" is split into five themes: flowers and birds, animals, human figures, natural landscapes, and drawing sketches that have rarely been seen in public. A digital version of Lin's masterpiece "Lotus Pond (蓮池)," the first-ever modern painting to receive the nation's highest designation for antiquities, will also be on display.

With the help of artificial intelligence (AI) and gaze-tracking technology, the artwork from 1930 has been transformed into an interactive natural scenery of light and sound. Visitors will be able to enjoy the piece's floating lotus leaves, gliding dragonflies, strolling egrets, and the vivid sounds of croaking frogs.

Speaking at the exhibition's grand opening and the donation ceremony of Lin's artworks on Dec. 15, Minister of Culture Cheng Li-chiun said while Lin lived through several turbulent cultural and political eras, what remains unchanged is the artist's love for his native land and his passion for life.

Lin is not only a pioneer painter, Minister Cheng stated, he has also nurtured countless talents and organized local painting lectures, boosting the nation’s advancements and international prestige in art. "His life is a microcosm of Taiwan's art history," she explained.

While expressing her appreciation for the some 2,500 donated pieces, Cheng noted that the exhibition stems from the Ministry of Culture's "Reconstruction of Taiwan's Art History," an initiative put forth in 2017 to systematically document the nation’s progression in the arts, so as to paint a clearer picture of the nation's artistic legacy for future generations.