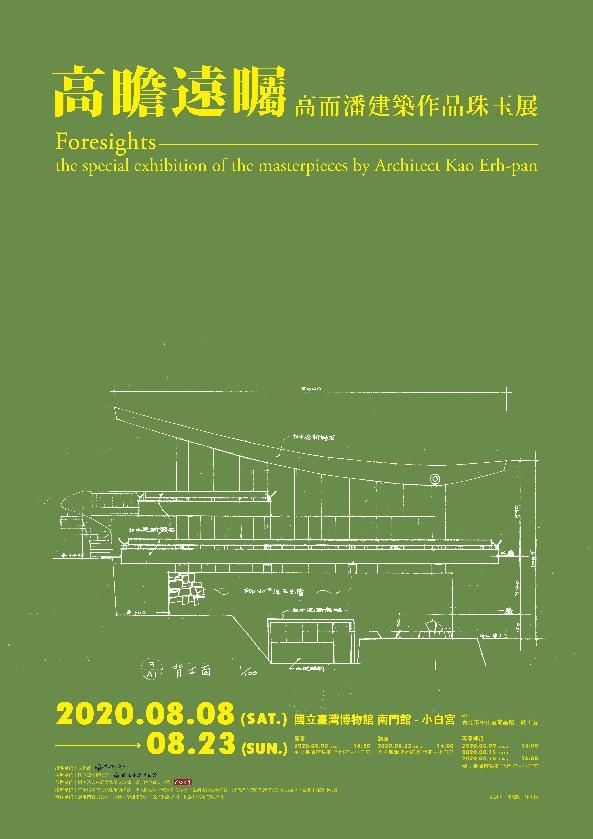 The National Taiwan Museum is presenting architectural illustrations, models and photos of masterpieces of architect Kao Erh-pan (高而潘) at the museum’s Nanmen Branch, Little White House, on August 8-23. The exhibition, "Foresights – The Special Exhibition of the Masterpieces by Architect Kao Erh-pan," features 13 iconic works of Kao, a first-generation architect in the post-Second World War Taiwan.

The exhibition traces the cornerstones of Kao's career, from the Taipei Fine Arts Museum, renowned philosopher Hu Shih's (胡適) graveyard, to the building that houses Chinese Television System, a television production and broadcasting company in Taiwan, all the while celebrating the distinctness of his designs that reflect the social, economic, and cultural transitions in three decades from 1960 to 1990.

The 93-year-old Kao is the most senior and a highly respected architect in Taiwan, according to Li Chien-lang (李乾朗), one of the curators. He added that Kao, born to a prominent family in Dadaocheng, one of the oldest neighborhoods in Taipei, first received Japanese education when Taiwan was under Japanese rule from 1895 and 1945, and later studied Chinese. Experiencing a period of confrontation and contradictions and appreciating an era of multicultural developments, Kao has inherited the traditional values and braced himself with avant-garde design ideas, said Li.

Describing Kao as an architect who dares to challenge social norms at the same time stays true to the essence of Modern Architecture – a design inspired by the historical art movement of modernism, curator Shyu Ming-song (徐明松) said, all of Kao's designs are representative works of contemporary architecture in Taiwan.

Kao believes an architect must keep finger on the pulse of society, so as to create the fittest design for contemporary society, Shyu added.

NTM Director Hung Shih-yu (洪世佑) said the museum reached out to Kao when it launched a preservation project in 2007 to digitalize classic architectural designs from post-war period in Taiwan. At that time, Hung said, the distinguished architect donated all of his illustrations to the museum.

The exhibition is not only held to pay tribute to the exceptional postwar Taiwanese architect, but also cast light on the solid professionalism, determination, and self-realization embodied by the generation of architects who joined the profession after World War II, the director explained.