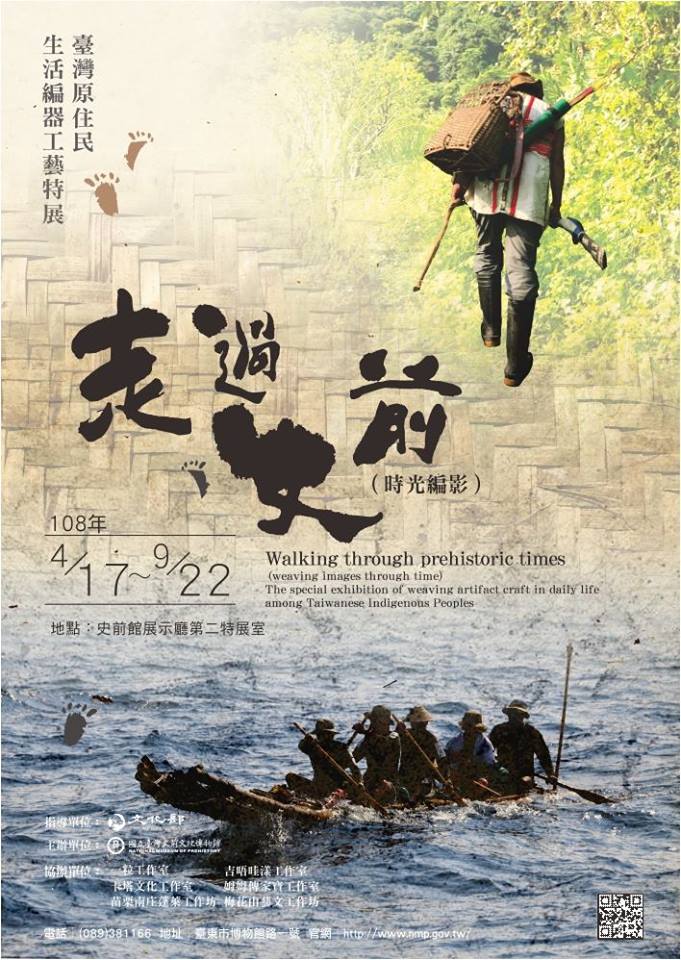 "Walking Through Prehistoric Times," a special exhibition on the weaving arts of Taiwanese indigenous groups, will take place at the Taitung-based National Museum of History (NMP) from April 17 through Sept. 22.

Chu-Yin Culture and Arts Troupe (杵音文化藝術團) opened the event on April 17 with a singing ceremony, followed by a traditional ritual from the eastern Rukai village of Taromak that ushered in the exhibition with an engagement gift woven from vine and betel palm. Finally, painter Lermaliz (吳信和) from the Paiwan village of Kadraluljan presented a 3D scene of the mountain forests of the Bunun.

Combining an exhibition, a performance, and visual design elements, the opening ceremony was a thorough presentation of how NMP ties together prehistory and indigenous culture with the past and present of weaving crafts.

Museum director Wang Chang-hua (王長華) gave the keynote speech, commenting that while NMP is built around archeology, it has also grown alongside indigenous culture, and in both its exhibitions and its services, the museum is committed to bringing together ethnology and archeology.

"Walking Through Prehistoric Times" connects archeological evidence of the use of weaving to produce patterns on pottery to the cultural memories of modern indigenous peoples and their traditional crafts. The exhibits showcase age-old weaving artifacts while also revealing how contemporary artists are putting the craft to use in new media to create ingenious blends of old and new.

In the past, the production of woven goods was a regular part of daily life for Taiwan's indigenous peoples. This art is not only one shared across the majority of those distinct groups, but also forms concrete symbols of their traditions. In short, weaving is an essential part of living.

The late Difang Duana (郭英男), an Amis singer renowned in Taiwan and abroad, produced an exquisite fagal (woven Amis clothing basket) in 1997, which was gifted to Chu-Yin Culture and Arts Troupe as a prop for their performances. Troupe leader Kao Shu-chuan (高淑娟) made a particular point of providing this important item for the exhibition to help the public see how Duana was not just a wonderful singer, but also a skilled weaver.

Built around "artifacts of weaving," this exhibition begins with prehistoric pottery unearthed at the museum's Beinan site, taking visitors to look at the evident patterns and basket prints and how that fact implies that Taitung's prehistoric residents must have had knowledge of weaving and related tools.

Since 2016, NMP has been working with a group of Amis craftspeople who use traditional methods to construct a canoe capable of crossing the Kuroshio Current to Okinawa in an attempt to retrace a potential prehistoric migration route from Taiwan to Japan.

The museum has also been engaged in systematic analysis of its collection of indigenous woven artifacts, hoping to restore them by a combination of science and research.