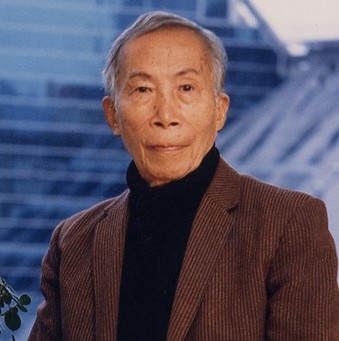 Wang Da-hong, who studied at Cambridge University and Harvard University, was the first architect in Taiwan who acquired comprehensive Western knowledge in modern theory and applied it to Chinese architecture. For his contributions to Taiwan's modern architecture movement, he received the National Award for the Arts in 2009 and the National Cultural Award in 2013.

Born in Beijing and raised in Shanghai, Wang left China at the age of 13 to study in Europe and the U.S. In 1952, Wang relocated to Taiwan and started his career in Taipei. Despite an education based on the ideology of modernism, he sought to integrate Chinese traditions with what he learned in the West. For Wang, architecture is closely linked with the environment, and each building is a reflection of national history and past civilizations.

When it came to the National Dr. Sun Yat-sen Memorial Hall in 1972, Wang focused on making the space publicly available, creating a visitor-friendly government venue instead of following the norm of political hegemony in architecture. Although he did have to compromise on certain aspects, such as the palatial design of the sweeping roof, Wang successfully cultivated modern architecture with Chinese roots on Taiwan.

Other remarkable works include the Ministry of Foreign Affairs headquarters in the Bo'ai Special Zone; the Taipei Prison in Taoyuan County; his personal residence Hong-Lu Apartment (虹盧); and the Student Activity Center of the National Taiwan University campus, all of which reflect Wang's modern influence on traditional Chinese architecture.

Among all his blueprints, his design for a monument commemorating mankind's first-ever landing on the moon is reputed to be Wang's favorite work. It is a design expressing the modern concepts of simplicity and his respect for the universe. Though Project Selene was never built because of the geo-political issues of that era, the design of two tall towers that symbolized human arms reaching for the sky received high praise in the U.S.

As a groundbreaking architect in Taiwan, Wang created a new architectural style of his own and mentored those who became the nation's contemporary leading architects. His innovative vision has brought new aesthetics to Taiwan's architectural world since the 1950s and leads the modern movement of architecture, in which his works are forever reminiscent of Chinese cultural context within the modernist presentation in Taiwan.