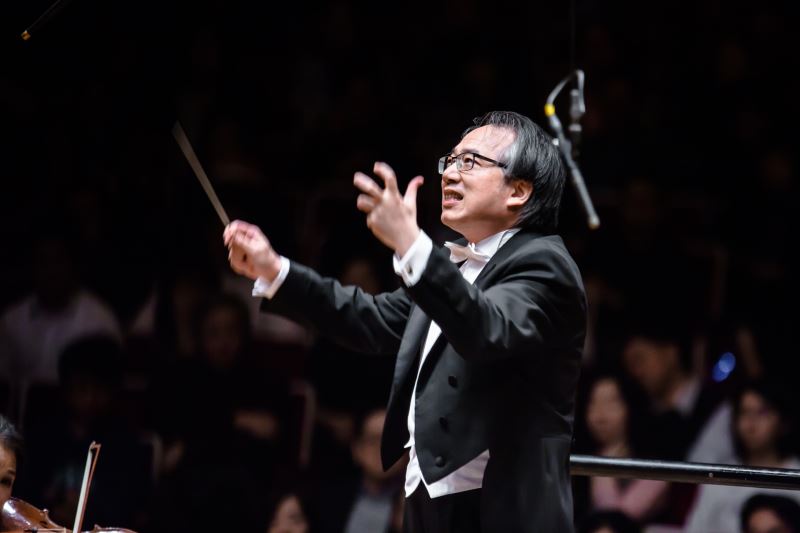 Chinese Name: 呂紹嘉
Date of Birth: 1960
Place of Birth: Hsinchu County, Taiwan
Did You Know?
Lu Shao-chia is a Taiwan-born conductor of symphonies and operas who has earned international renown for his work in Europe and has received numerous international awards. During his tenure as Music Director of the National Symphony Orchestra (NSO), Lu was awarded the title of Conductor Emeritus for his work elevating the level of appreciation and vision of classical music in Taiwan. In recognition of his outstanding performance in the field of music, he was awarded the 41st National Cultural Award by the Executive Yuan in 2022.

Born in Zhudong, Lu Shao-chia’s parents both loved classical music and were dedicated to providing their children with an education in music. Learning piano at a young age, Lu showed a gift for music, winning awards in numerous competitions. While studying Psychology at National Taiwan University, he joined the school choir as a piano accompanist, where he was mentored by conductor Felix Chen. Afterward, he began to formally study conducting and served as a conductor for choirs, wind ensembles, string orchestras, and full orchestras, cementing his ambition to become a conductor.

In 1994, he was invited on short notice to conduct the Munich Philharmonic Orchestra for two sets of performances in Taiwan, and his outstanding performance was unanimously praised by the international media, launching his international conducting career and kicking off a long career of close cooperation with a variety of major orchestras. During his time in Germany, he was the principal conductor of the Komische Oper Berliner from 1995 to 1998, conducting more than 30 operas and hundreds of performances, establishing his reputation as one of the leading opera conductors of his generation.

In terms of orchestral conducting, Lu Shao-chia has worked frequently with many leading European orchestras such as the Royal Concertgebouw Orchestra in Amsterdam, Münchner Philharmoniker, SWR Stuttgart, Rundfunksinfonieorchster Berlin, the Oslo Philharmonic, the Swedish Radio Orchestra, the Göteborg Sinfoniker, Orchestra dell’Accademia Nazionale di Santa Cecilia, and Orchestre National de France. In Asia, in addition to a busy schedule of local performances in Taiwan, Lu has been invited to work with the Hong Kong Philharmonic, NHK, New Japan Philharmonic, Seoul Philharmonic, KBS Symphony Orchestra, and leading orchestras in Beijing and Shanghai.

In addition to orchestral conducting, Lu Shao-chia continues to have a brilliant career in opera conducting. He has been invited as guest conductor at the Oper Frankfurt, Staatsoper Hamburg and Stuttgart, Deutsche Oper, Komische Oper Berlin, Opera Australia in Sydney and Melbourne, the English National Opera, Théâtre de la Monnaie in Brussels, Den Norske Opera in Oslo and the Gothenburg Opera in Sweden.

Between 2010 and 2020, Lu served as music director of Taiwan’s NSO and was awarded the title of Conductor Emeritus in the 2021-2022 season. He was also the Chief Conductor of the South Denmark Philharmonic from 2014 to 2017. In recognition of his outstanding performance in the field of music, Lu Shao-chia was awarded the 41st National Cultural Award by the Executive Yuan in 2022.

During his tenure with the NSO, Lu honed the ensemble’s versatile and delicate sound and profound expressiveness in a spirit of refinement, profundity, and evocativeness, planning its repertoire with a thematic and diverse spirit and across styles and eras, introducing Western classics from the 20th century onward to boost the appreciation and vision of classical music in Taiwan.

In a concert, Lu has said, the most important parts are the work and the composer; the responsibility of the conductor is to convey the emotion and spirit the composer wanted to communicate to the performers through technique and communication skills, leading the members to work together and present a perfect picture to the audience. Respect for the composer, the work, and the musicians is the proper attitude of a conductor, and Lu is a conductor brimming with humility and gratitude for the opportunity to stand on stage and lead an orchestra.