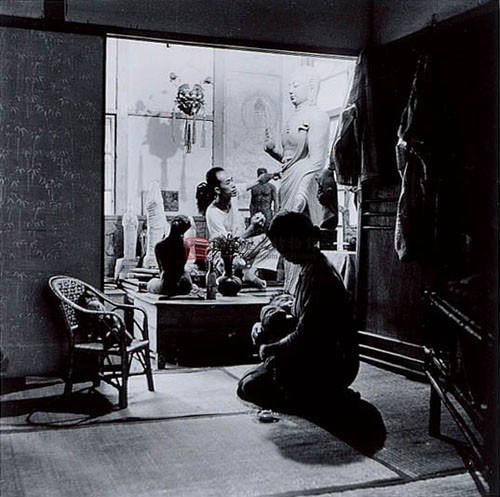 Born in Yilan in 1926, world-renowned sculptor Yang Ying-feng grew up surrounded by beautiful mountains and crystal-clear streams. Nicknamed "Yu Yu,” he loved nature and became absorbed in clay sculpture and paper-cutting in his childhood.

His parents lived in Beijing where his father worked and Yang moved there in 1940 at the age of 13. Previously Japanese-schooled, he developed a love for classical Chinese culture while in Beijing and decided to become an artist, even though his parents expected him to be an architect. In 1943, Yang went to Japan to study architecture at the Tokyo Fine Arts School.

Deeply influenced by Isoya Yoshida(吉田五十八), a Japanese architect, Yang began to embrace the relationship between building materials and local settings. He also studied under the Japanese modernist Fumio Asakura(朝倉文夫) who was mentored by Auguste Rodin, the French maker of the 1889 masterpiece "The Thinker.” Studying under these masters laid a solid foundation in Yang's own style — lifescape sculpture that emphasizes the harmony of humanity, environment, and art.

As Yang's interest in environmental arts began to take root, his parents asked him to come back to China at the outbreak of World War II. He transferred to the Department of Fine Arts at Fu-jen Catholic University in Beijing in 1946.

During this period, he took up taichi, an ancient Chinese martial art, and traveled to the Yungang Grottoes (雲崗石窟) of Datong City in Shanxi province. The grottoes contain 252 caves and 51,000 Buddhist statues that were the legacy of outstanding stone carvers in China during the 5th and 6th centuries. As a devout Buddhist, the young artist was left with a deep impression of classical Chinese Buddhist art.

In 1948, he returned to Taipei to study at the National Taiwan Normal University under Chang Dai-chien (張大千) — one of the best-known Chinese artists in the 20th century. But after three years, financial difficulties drove Yang to suspend his schooling, as his parents and younger brother were barred from exiting the mainland after the Communist takeover.

To support his wife and their firstborn, he started to work as an art editor for the Harvest Magazine (豐年雜誌); within eleven years, Yang had visited every corner of Taiwan and created numerous works of comic sketches, watercolor paintings, and sculptures.

His first major breakthrough was in 1953, when Yang won his first award for "Sudden Rain” (驟雨). Later in 1956, his Buddhist sculpture — "Higher When You Look Up” (仰之彌高) — was selected by the Sao Paulo Art Biennial in Brazil and then purchased by the National Museum of History in Taiwan.

In 1962, he decided to quit his job at the magazine and concentrate on artistic creation. He began to use stainless steel for his sculptures and traveled to Italy to study modern art forms. After three years in Rome, Yang came back to Taiwan and started a bronzeseries of landscape sculptures in Hualien, drawing inspiration from the magnificent scenery of the Taroko National Park.

In 1961, he started accepting commissions from governments, hotels, and theme parks to produce a wide variety of sculptures, and became a well-known artist at home and abroad. In 1970, he was invited to the Expo '70 (a World's Fair held in Osaka, Japan) to display one of his most famous works — "Advent of the Phoenix” (鳳凰來儀). Another piece, the "Little Flying Phoenix” (小鳳翔) that was seen as the counterpart to "Advent of the Phoenix,” was later collected by the Taipei Fine Arts Museum.

From the 70s to the 90s, the prolific artist held numerous exhibitions in Tokyo, New York, Rome, London, and Paris. In later years, he devoted himself to the development of lifescape sculpture and mentored several well-known Taiwanese sculptors, including Ju Ming (朱銘). The 72-year-old passed away in Hsinchu in 1997.