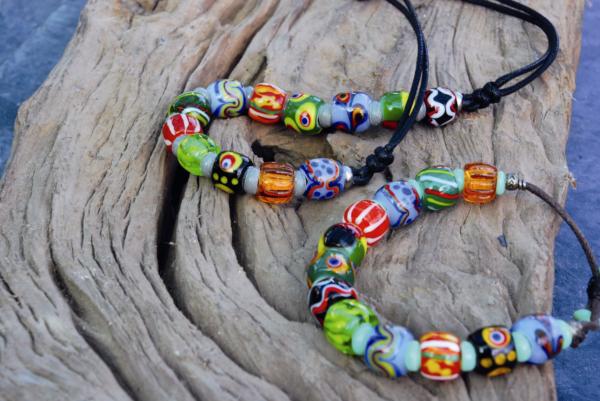 The glass beads of Sandimen

To the people of the Paiwan tribe, the three most important categories of heirlooms and treasures are glass beads, pottery, and bronze knives. While each of Taiwan’s indigenous tribes has their own distinctive style of glass bead craft, the qata glass beads of the Paiwan people are the most well-known.

Located in the village of Sandimen (known in Paiwan as Timur) in Pingtung County, Dragonfly Beads Art Studio has long been engaged in glass firing and passing on this innovative and creative part of Paiwan culture. In earlier years, the studio focused on reviving and replicating traditional qata-firing methods, later moving on to innovating style and firing techniques to give these traditional beads a modern look.

What makes Dragonfly Beads Art Studio stand out is its reputation as the “home of qata in Sandimen,” with a staff made up almost entirely of local Paiwan people. A dozen or so years back, the studio also began working with interested people from other ethnic groups who were interested in studying how to fire qata, and the Council of Indigenous Peoples and Taiwan Indigenous Cultural Park both organized classes there. The staff of Dragonfly served as “seed teachers,” implanting the knowledge of this traditional art to people from beyond their tribe.

While there are other places in Taiwan that also work on the firing of glass beads, it is their deep local ties that make Dragonfly Beads Art Studio unique. These ties have also inspired the people of Dragonfly Beads Art Studio to begin getting involved in other parts of the local cultural industry. Although these efforts will take time to come to fruition, the collective transformation will be worth the wait.

Remereman Taruzaljung, founder of Dragonfly Beads Art Studio, has crafted a business centered on preserving and promoting indigenous heritage. As a child, she had learned the Paiwan respect for the glass arts, their cultural significance deeply rooted in her soul … (read more)