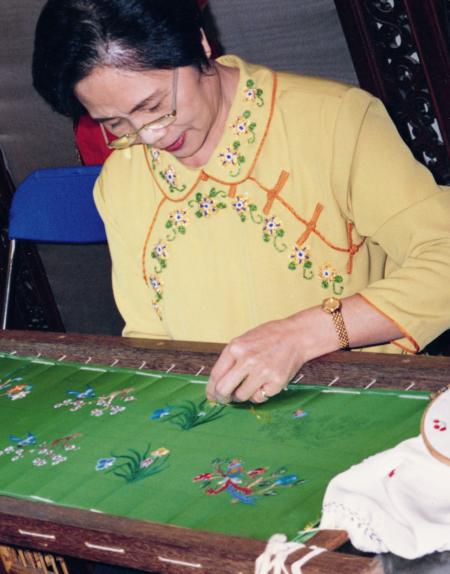 There is a traditional idiom that says, "a world created by ten fingers," which is a great way to describe traditional embroidery. With her nimble hands, Xu Chen Chun (許陳春) uses needlework, cloth, thread, and padding materials to create nature-inspired designs like roosters, hawks, dragons, phoenixes, qilins, flowers, plants, and other animals. From traditional flat embroidery to three-dimensional designs, her creations are exquisite, intricate, and lifelike.

Lukang is a township in Changhua where traditional crafts still thrive and are passed down from generation to generation. Xu Chen's father is a craftsman as well, therefore she learned how to make handmade toys from her father since she was a child, while her mother taught her embroidery.

Xu Chen's husband's family business of constructing lanterns also fall under the traditional craft industry, and she applied many lantern-making techniques to her embroidery. However, after the birth of their children, the family decided to move to Taipei due to financial considerations and better educational opportunities for their kids.

It wasn't until 1993, when Xu Chen saw her younger brother, renowned tin-art creator Chen Wan-neng (陳萬能), make three-dimensional tin works of dragons, phoenixes, and qilins. It inspired Xu Chen to try a hand at creating "three-dimensional embroidery" using her elaborate skills as a master embroiderer. Finding success, she returned to Lukang to open a studio to focus on her embroidery creations.

In her "Family Portrait (全家福)" piece, a rooster is crowing with his head held high, while the hen has her head bent downward seeking food with her chicks. Everything from the rooster's crown, feathers, and claws to body shape make up the splitting image of the common variety that is bred in Taiwan.

When creating this piece, Xu Chen first observed special characteristics, like the feathers, and behavioral habits of the flock. After creating conceptual drawings, she then searches for the most suitable flannel colors, cuts them into the required size, hand-sews on each piece of feather, and stitches together the components. There is no inner frame propping up the work during the construction process, and she draws on experience to form the accurate shape before the embroidered exterior is stuffed with padding materials.

A popular children’s tag game called "The Eagle and the Chick" was the inspiration for Xu Chen's "Heroic Independence (英雄獨立)" piece, a work based on the eagle's successful abduction of chickens. The eagle's sharp eyes and pointy beak are made by hand using needlework, and under Xu Chen's skillful eye, she was able to bring the eagle to life. Additionally, to make the feathers look more realistic, she stitched wires to the flannel material to create a fluffy-like appearance.

It has been almost 60 years since the first time Xu Chen, at the young age of twelve, began learning embroidery. She has since been able to transform traditional embroidery into a beautiful, expressive embellishment. It has been happy needlework all these years, she revealed.