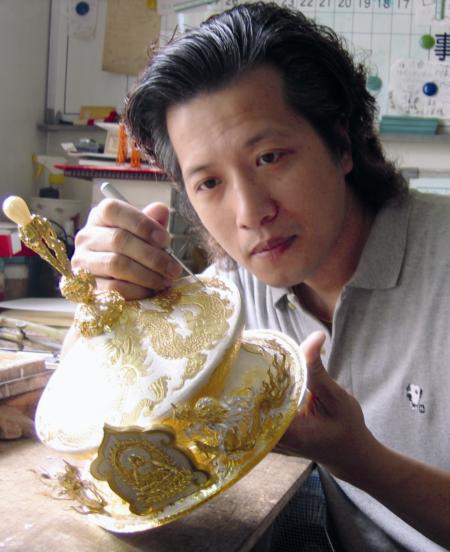 Su Chien-an's vocational education in automotive repair and college studies of food science may seem like an odd conflict between greasy hands and food, but what came next in his career might be even more surprising — a mastery of the delicate art of crafting fine works from gold and silver.

He may have studied automotive repair at vocational school, but after graduating, Su chose to take up a job in a gold-casting plant. Being a precious metal, gold is not something just anyone can jump in and work with — applicants need to be recommended and guaranteed by someone already in the know.

Working there, Su learned the skills involved in working gold. After stepping away and completing his military service, he wanted to continue his education there, but was told not to bother. At first, Su thought this was a rejection, but after asking more, he realized that was not really the case, and that in fact, his boss felt his skills were already so advanced that was nothing more for him to learn there.

His older brother Michael Su Chi-sung (蘇啟松) went into silversmithing and working together, the two siblings set up Tianguan Silverware Studio (天冠銀帽) in 1998, creating a number of works of great artistic value in the years since. They made their exhibition debut in 2000 at the Third Tainan Traditional and Folk Crafts Exhibition, and since then they have gone on to win several titles, including four National Crafts Awards, becoming a leader in the metalworking world.

Several years ago, the "Blessed Hu of Seven Treasures" that belonged to the goddess Matsu of Tainan's Datianhou Temple (大天后宮) was damaged, and the casters of the time left no records of how to restore it. To preserve this treasure, a recognized Class A relic, the temple looked far and wide for help, ultimately commissioning the Su brothers for the job. Through a process of deduction and copying, the two eventually managed to complete the repairs needed.

"The pressure was intense," said Su, "because if we did a good job, our reputation would shine for years and years, but if we did a bad job, our names would be muddled for centuries." To ensure this valued relic could continue to survive through the ages, Su engraved the repair process into the back of the hu, so that later generations would have some guidelines to follow.

While his past studies may seem disconnected from his current vocation, food science student Su says that artists need to pay attention to their health, because a healthy body can ensure a long creative career. Over the course of such a career, Su looks forward to continuing developing a distinctively Taiwanese approach to silverwork and carving out a space in the international crafts scene for Taiwanese gold and silver crafts.