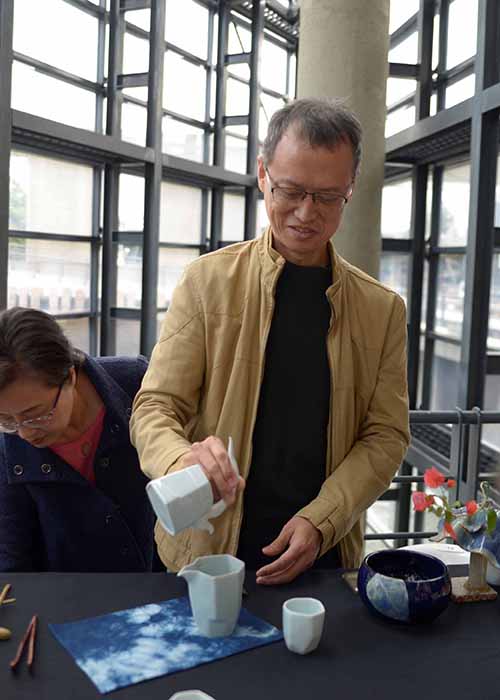 Chinese Name: 卓銘順
Year of Birth: 1968
Place of Birth: New Taipei City, Taiwan
Did You Know?
Ceramic artist Cho Ming-shun gives full play to the practical nature of pottery, basing his art on the concept of "interaction theory," allowing his pottery to leave the display case and interact with people in everyday life, creating a new relationship between people and pots. In 2021, his creation of "Homonculus LR" combined nature and science, winning the highest award at the Korean International Ceramic Biennale and making Cho the first Taiwanese to receive the honor.

Cho Ming-shun grew up in Yingge in a farming family. Since he was a child, Cho helped out his family at the farm and has also worked as a proxy manufacturer of ceramic products, meaning he has been involved with both nature and ceramics for much of his life. His passion for pottery was initially sparked in high school, when he saw several pottery creation techniques introduced on TV.

During his school holidays, Cho worked in a plaster molding factory. In addition to the daily work assigned by his boss, he also took the opportunity to make molds for bronze vases and Buddha statues. During his school years, Cho Ming-shun continued to hone his understanding of and ability in the field of ceramics. In this period, his work was mostly build on the forms of Liu Zhenzhou, a master of the ceramic plate.

In 1988, he enrolled in the Ceramics Department of the National Taiwan Academy of Arts, marking his start as a specialist ceramicist. After graduating, he made ceramics that are used for in everyday life at his friend’s art store, eventually establishing his own studio after his marriage. In 2009, he received an MFA in Crafts and Design from National Taiwan University of the Arts.

Cho’s creative style is founded on his rich life experience and can be categorized into three periods. The first is characterized by his childhood experience with farming, which led to his early works incorporating natural elements and being rich in distinctive botanical patterns. The second period was focused on "interaction theory," enabling his works to go beyond the limitations of the past and extend into a more practical realm, reaching into daily life and expanding on the beauty of pottery as he created his own unique style.

The third period has brought together the vital energies of the first two to create a series of works on the theme of "After the Age of the Organism." Cho believes that the line between living things and artifacts will become increasingly blurred in the future, and thus he aims to explore what the definition and form of an artifact that fully expresses its biological functions could be in a future society. This series of works, whose appearance imitates the form of living creatures, boasts not only practical nature, but also the ability to perform their various functions in ordinary life as they interact with users.

Through Cho's hands, his creations are imbued with the warmth of life. He is always looking for a balance between play and creation in his art. He is constantly trying to take the essence and characteristics of ceramics and expand their possibility space.

In 2021, Cho's passion for combining nature and science in his creations led to the creation of "Homunculus LR," which won the highest honor at the Korean International Ceramic Biennale and set a new milestone for Taiwanese competitors in this competition. The artist explained that teapots have traditionally been simply "functional" objects, sitting quietly on the table waiting for people to use them. However, through interaction, one can evoke new emotions in the relationship between human and artifact. The connection of organic and inorganic gives new, richer meaning to the existences of both. This "symbiotic" teapot therefore creates a whole new relationship between person and pot.

From his childhood love for the land, his subtle observation of nature, and his emotional memories of his family, to his breakthroughs in artistic creation and intellectual inquiry, all of the various aspects that make up Cho Ming-shun come together in the clay in his hands, his life experience fired into brilliant pieces of work.