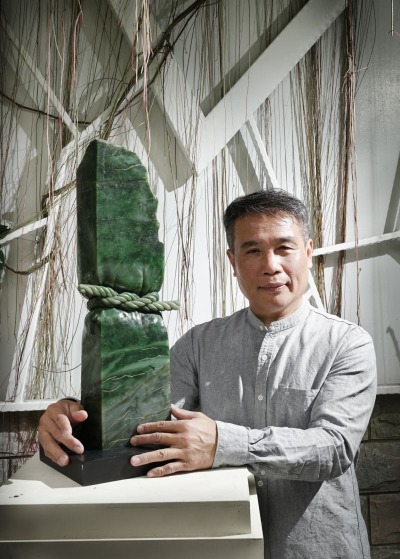 Chinese Name: 黃福壽
Year of Birth: 1957
Place of Birth: Kaohsiung, Taiwan
Did You Know?
Anyone who sees Huang Fushou’s works for the first time will be amazed at the level of fine detail in his creations. A Chinese master craftsman was astonished upon seeing Huang’s work at the Great Shanghai Jewellery Fair and could not believe that extremely hard jadeite could be carved to such detail, arguably breaking a barrier in jade carving that had stood for thousands of years.

Born in Kaohsiung in 1957, Huang Fushou went to work in a jade processing factory in Taipei after graduating from junior high school. This was his first contact with jade carving. From pendants, Buddha statues, animals, and other trinkets specified by the factory owner to picking up cut edges and scraps after work and carving them in his own time, Huang’s adult life has been dedicated to creative jade work.

Huang was a talented artist even as a child, often taking part in art competitions and winning awards. This talent earned him the appreciation of the owner as soon as he arrived at the jade factory, and without the usual training in the material identification, grinding, and polishing departments, the owner let him start carving straight away. He quickly lived up to his boss’ expectations, proving to have gifted hands. He produced a number of new ideas for small jewelry, and particularly in his own private carving of figurines. Their proportions, look, and poses were accurate, delicate, and avoided cliché, and the boss, who valued such talent, soon let Huang design new products himself, slowly building a reputation in the jade carving industry.

But Huang Fushou was not satisfied to rest on these laurels. He invested much of his passion into jade carving, hoping to break away from the practical side, involving such things as decorative carvings and items to ward off evil spirits, and enter into a journey of truly personal artistic creation. A keen learner, Huang often uses his spare time to enrich himself, visiting the National Palace Museum and various art museums to take in exhibitions and study jade-related information. He strives to explore the contemporary art of jade carving and creative concepts that can enable him to express himself more fully. His works have been increasingly recognized by the public, such as “Joy to Heaven and Earth” and “Life Unceasing,” which have been awarded the Traditional Craft Award and been accepted into the collection of the National Center for Traditional Arts.

Not only does he carve jade stones weighing dozens of kilograms into vivid, delicate recreations of natural elements such as flowers, birds, plants, and insects with his skillful hands, but as a Buddhist, Huang Fushou has also created a number of jade sculptures to illustrate Buddhist philosophy by combining his own beliefs and Buddhist teachings, using his superb techniques to carve the compassionate faces of the Buddha Gautama and the Bodhisattva Guanyin. Huang works at least twelve hours a day and says that each piece of jade is like a world unto itself, with its own particular personality and unique soul. As a carver, he says, it is his task to remove what is in excess to allow that soul to come into its fullest expression.

This love for and commitment to jade, and his drive to pass on the culture, have helped this amateur sculptor with deep artistic talent but no formal training grow through ongoing self-education, breaking through the limits of the art of jade carving to create an artistic world all of his own. The skillful craftsmanship also earned Huang Fushou the title of National Living Treasure from the Ministry of Culture in 2020. Huang has been creating jade sculptures for nearly fifty years, and has no intention of stopping now, continuing a life dedicated to his creative pursuit.