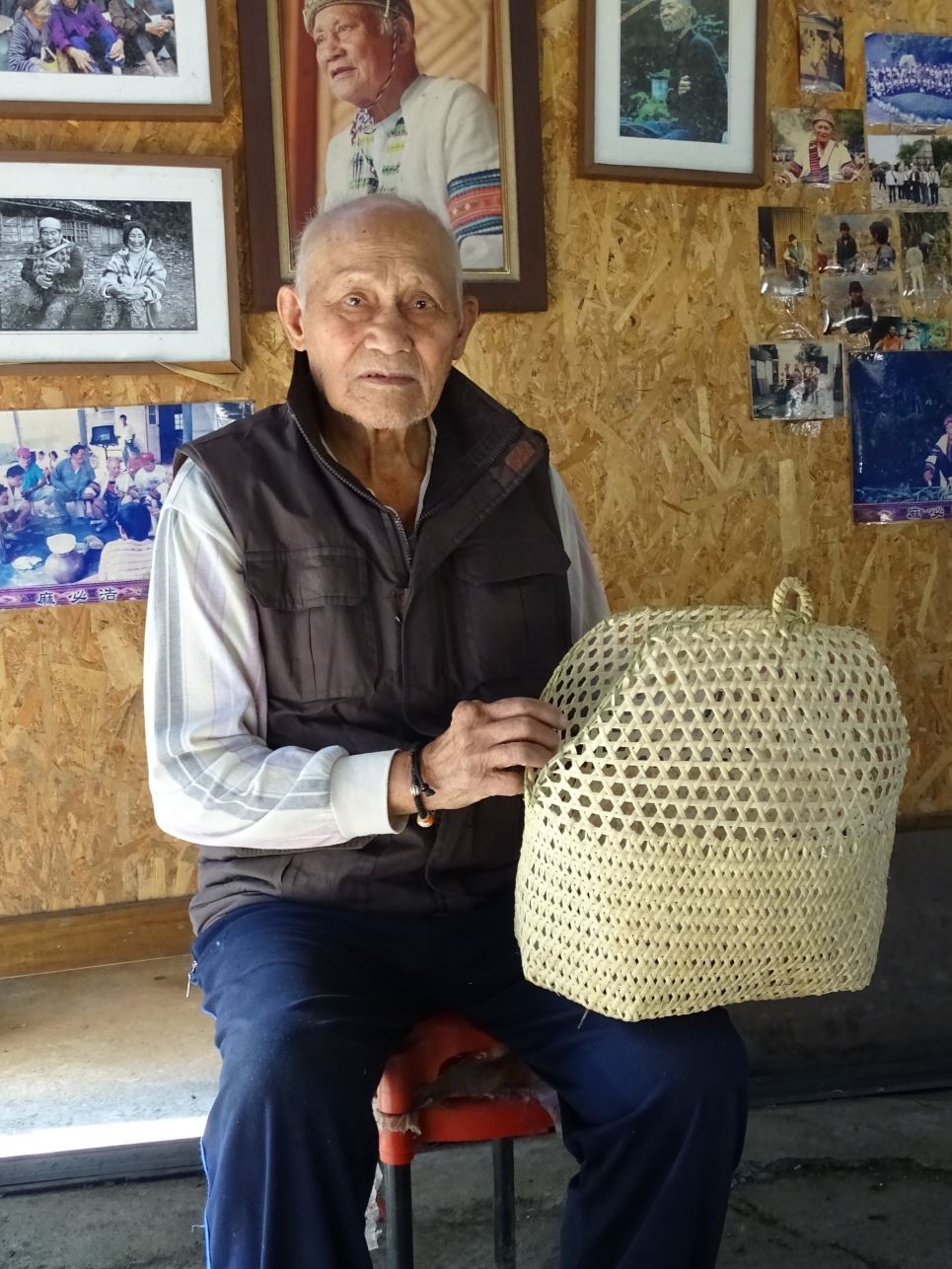 Chinese Name: 達利．瓦紹 (高春輝)
Date of Birth: March 1, 1928
Place of Birth: Tai'an Township, Miaoli
Did You Know?
Tali Wasaw (達利．瓦紹) is the leader of the Atayal village of Mabanan (Yong'an in Mandarin), located in Tai’an Township, Miaoli. A specialist in the traditional craft of rattan weaving, he has been recognized as an important preserver of the Atayal crafts of rattan and bamboo weaving craft. He is also familiar with the Atayal oral tradition, particularly around the origins of their culture and migration history, and is eager and able to continue passing these on. In 2019, he was registered by the Miaoli County Government as one of the preservers of the gaga oral tradition of the northern Atayal people.

Tali Wasaw, is a member of the indigenous Atayal people, born into the Mabanan community, of which he went on to become the leader. After losing his parents at the age of eight, he learned from the elders of the community the traditional farming and bamboo/rattan weaving skills that one must be proficient in as an Atayal man. He specializes particularly in traditional crafts like bamboo and rattan weaving, having developed a thorough familiarity with the process from picking materials and cutting rattan/bamboo strips to weaving. He is also great at making traditional Atayal bamboo bridges as well as bows and arrows. He is currently the Atayal rattan and bamboo weaving crafts master of Nansan Village in Tai'an Township, working as an important preserver of the crafts.

Tali Wasaw's more common products are Atayal men's special tools for carrying hunting hauls and other heavy objects, back-mounted baskets called tokan, along with the similar baskets used by women, called kisi. From picking, drying, and cutting rattan to weaving it, every step relies on a depth of knowledge, experience, and patience inherited from the ancestors. Tali Wasaw continues to practice this restrained and elegant skill with dedication and commitment.

His studio is a two-story stilt house, located at No. 22, Neighborhood 3, Xiangbi Village, Tai'an Township, Miaoli County, which was built through a collective effort of the villagers under Tali Wasaw's leadership and has become a landmark for the Mabanan community. He has built more than a dozen traditional Atayal stilt houses, and has even been invited to Yilan and Taichung Counties to guide and participate in the construction of similar traditional buildings.

In addition to the traditional craftsmanship with which he is so familiar, Tali Wasaw also participated in important meetings led by former community head Maray Takun, in which the elder imparted to him the community's oral history, culture, and traditional knowledge. In 1996, 68-year-old Tali Wasaw took the symbolic drinking glass from Maray Takun to become the new leader of Mabanan, also becoming a member of the Tai’an Township Atayal Leaders Cultural Association, joining in the active promotion of local Atayal affairs.

In addition, the Mabanan community to which Tali Wasaw belongs is part of the northern Atayal. Part of the culture of the northern Atayal is the tradition of passing along gaga, the rules and norms of the Atayal people, through oral heritage, whether through narration or through the singing of songs. Community elders who are particularly good speakers are generally the ones entrusted with the passing on of gaga, taking turns to sing through the Atayal migration history as well, preserving tradition in an act with tremendous cultural meaning. This oral tradition is a profound one; the chanting is performed alone or in duets to express emotions, and different themes will be chanted according to different situations. It is a linguistic repository of the wisdom and history of the Atayal, as well as a means for presenting their musical aesthetic. This tradition is one that relies on being passed on orally, and with the elders dying, there is an urgent need for its revival. Currently, the four in charge of passing on this tradition are Yupas Kagi (柯正原), Tali Wasaw, Yupas Wata (尤巴斯‧瓦旦), and Mayngu Nawkih (楊忠義), all of whom are eager and capable practitioners. As a result of this work, Tali Wasaw was registered in 2019 by the Miaoli County Culture and Tourism Bureau as an official preserver of the gaga oral tradition of the northern Atayal.

In 2021, in order to keep the traditional culture and skills of weaving yellow rattan alive, the Dongshi Forest Area Management Office of the Forestry Bureau assisted the community in applying to the community forestry plan with their project "Mabanan Leader—Tali Wasaw's Memory and Skills of Rattan Weaving (麻必浩部落頭目─高春輝「藤編」的記憶&技藝)." This project aimed to bring together a group of aspiring young Atayal to participate in an effort to pass on rattan weaving skills, with Tali Wasaw personally imparting relevant knowledge and guidance.

While he is getting on in years, Tali Wasaw still leads and presides over the traditional ceremonies of his community and continues his unremitting efforts for the harmony, interests, and cultural sustainability of his people. He often reminds the community of the importance of remembering the wisdom left by their ancestors and the ancestral teachings of unity and cooperation, lessons that have value for all of us regardless of our particular communities.