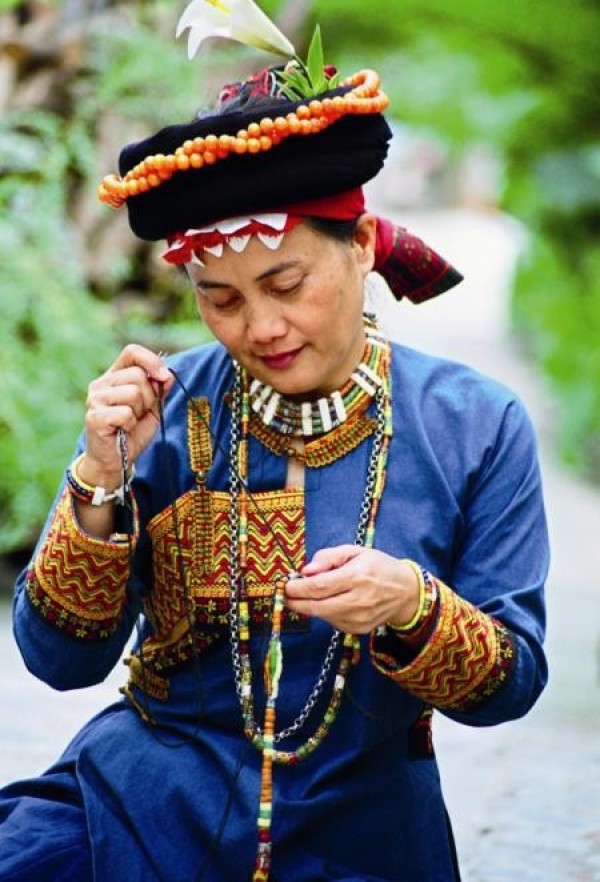 In the wake of the massive popularity of the 2008 film “Cape No. 7,” related merchandise began to sell like hotcakes across Taiwan. At one point in the film, the main female protagonist Tomoko (played by Chie Tanaka) gifted the band members with some glass beads that reflected each character’s life history and aspirations. As a result, Remereman Taruzaljung’s Dragonfly Beads Art Studio became an overnight success, their qata flying off the shelves.

Remereman, also known by her Chinese name Shih Hsiu-chu (施秀菊), is the elder sister of folk singer Samson Shih and a former elementary school teacher. As a child, she had learned the Paiwan respect for the glass arts, their cultural significance deeply rooted in her soul. When she realized that indigenous cultures were gradually disappearing from Taiwan and ever fewer people were aware of the significance and use of Paiwan glass beads, the talented businesswoman decided to try and inject new life into this ancient art.

In 1983, she began teaching the art of making qata while founding a studio with her husband to create a crafts business built around aboriginal heritage. Before the couple’s efforts were realized, Remereman’s husband was killed in a traffic accident, leaving her to take on the challenge of starting a business on her own. “I had no preconceptions of how big a thing I wanted to do, I just trusted in the plan God had for me,” stated Remereman, a devout Christian.

The two decades since, she says, everything went at a snail’s pace – slow, but steady. She started to develop a reputation in eastern Taiwan and even began attracting orders from customers in Japan. Today, Dragonfly Beads Art Studio employs over 30 people, all Paiwan women. “With this studio, the women can look after their kids and families and earn some money. We’re one big family here.”

“After ‘Cape No. 7’ was released, we were run ragged, with most of us only getting home in the middle of the night, resting a bit, and getting back to work,” she continued. “Without my team, I don’t know how I would’ve been able to deal with the sudden influx of orders.” In fact, what Dragonfly has done is more than just give local women a job and a skill, it’s given them a way to live with dignity and warmth.

Each string of qata has its own meaning. In the film, Tomoko gives the leading man, Aga (played by Van Fan), the “Bead of the Warrior,” which Remereman explains is an expression of praise from a tribal leader to a young warrior for his bravery, and a potent symbol of masculinity.

For the policeman Rauma, holding on to his love for his wife and wearing his own “Bead of Tears,” Tomoko brought the “Bead of Peacock,” an expression of his steadfast love; for Dada, she brought “Ancestors’ Eyes,” protectors of health and growth; Malasun’s “Bead of Butterfly Pupa” represents hard work and wealth; and Old Mao’s “Bead of Sunshine” highlights his distinctive nobility.

Dragonfly Beads Art Studio has combined local culture with tourism, not only offering a space for handicrafts, but also holding DIY beadmaking lessons and playing host to a cafe. On top of this, Remereman has also custom-made beads tailored to customer needs. Tempered at temperatures between 1,200 and 1,400 degrees Celsius, the beads boast gorgeous, eye-catching hues that seem to be colorful metaphors for a wonderful life.

Remereman may have come to people’s attention because of “Cape No. 7,” but her own life story is as colorful as any of her beads, tempered through fiery trials and characterized by vibrancy and indefatigability.

Malasun’s chrysalis token is given as “Bead of Butterfly Pupa” in the film’s English subtitles.