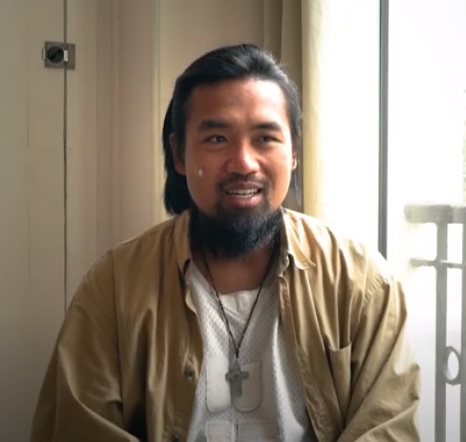 Name: 陳彥斌
Born: 1987
Birthplace: Taitung, eastern Taiwan
Did You Know That …?
With the hope that Fangas Nayaw will become a professional athlete, the Amis artist's father introduced him to tennis when he was at a young age. However, Fangas Nayaw's interests lay in performing arts and was determined to pursue theatre goals, which led to a long cold war with his father. Silver linings showed when his father watched one of his theater productions and decided to give blessing to his talented son's theater dreams.

Apart from being a theater director, Amis artist Fangas Nayaw (陳彥斌) is also a well-known choreographer and a performer. With his abundant artistic output, the versatile artist has earned himself the name of "creative monster (創作怪獸)" in Taiwan's theatre world. After graduating from the National Taiwan University's Department of Drama and Theatre, Fangas Nayaw furthered his studies in theatre performance and playwriting at Taipei National University of the Arts.

When Fangas Nayaw took a part as acting coach in "Pu'ing: Tracing the Atayal Route (Pu'ing‧找路)" in 2013, a production created by renowned Paiwan choreographer Bulareyaung Pagarlava, he found that young indigenous dancers, who were supposed to shoulder the responsibility of preserving and promoting their traditional music and dance, seemed to be more interested in American pop diva Beyonce' dance moves.

It also came to Fangas Nayaw's attention that young indigenous dancers were puzzled. On the one hand, they received performance training with a mixed feeling of excitement and uncertainty. On the other, they were distraught by the distance between the traditional tribal music and dance and their self-consciousness in a modern world. A dilemma in reality, how to adapt themselves to the reality, and at the same time, not to forsake the tradition in the face of globalization, is the theme constantly appearing in his productions.

Through "Maataw – the Floating Island (Mataaw浮島)," a theatrical production Fangas Nayaw directed in 2015, the emerging artist took the challenge of presenting the essence of traditional tribe culture on stage. "Maataw-the Floating Island" was originally designed to present ancient singing, dancing and ceremonies of Tao people on Orchid Island. Eventually, however, Fangas Nayaw decided to bring in the controversial topics which demonstrated the dilemma confronting the islanders, including the radioactive waste stored on the island and the accompanied impacts of tourism development.

The Amis artist's rich creativity did not go unnoticed, he was invited to choreograph a program featuring indigenous singing and dancing for 2017 Summer Universiade opening ceremony. Among other indigenous choreographers, Fangas Nayaw insisted that the indigenous-themed production must not abandon tradition, but, in the meantime, it should contain innovative elements. Seeking to preserve tradition and to embrace innovative creativity, Fangas Nayaw never ceases to find balance of the two and to have ways of breakthrough.

In 2018, Fangas Nayaw, along with three other emerging theater directors who grew up in the era where days of martial law hadn't far gone, was invited by Taiwanese director Hung Hung (鴻鴻) to produce a virtual reality project called "Too Many Dreams in One Night – The Undelivered Letters (夜長夢多：異境重返之求生計畫)."

The immersive journalistic documentary unfolds with a series of injustice cases from the period of Japanese rule, Taiwan's political repression known as the White Terror, and the present day, offering viewers a glimpse of the nation’s painful past in which numerous people were confined in a prison for the crimes they did not commit.

The core of Fangas Nayaw's works never strays far from his indigenous roots, he released a 360 immersive production "A Song Within Us (OLI邊境)" in 2019 to cast light on how Taiwan's indigenous peoples believe that music and dance serve as a bridge to communicate with their ancestors.

The interactive theater experience paints a holistic picture of the harmonious coexistence between Mother Nature and the indigenous communities. The 16-minute film is also a glorious testimony of how traditional aboriginal music and dance can be better presented through emerging technology platforms.

Fangas Nayaw said in an interview that performing arts can serve as a medium that bring forth changes. Some moving moments can make viewers wonder about the creators' background, creating process, and issues that they seek to address, through which culture would come to life in the powerful current of the times, the 33-year-old filmmaker said.