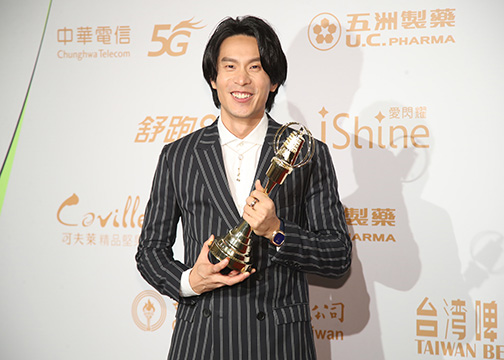 ‧ Chinese Name: 姚淳耀
‧ Date of Birth: October 29, 1984
‧ Place of Birth: Taipei, Taiwan
‧ Did You Know?
Actor Yao Chun-yao won the award for Best Leading Actor at the 55th Television Golden Bell Awards last year for his leading role in "The Mirror," for which he turned in a distinctive performance that saw audiences come to consider him a leading man in a new generation of acting talent. Yao first came to public attention for his performance in the 2010 film "Au Revoir Taipei," later going on to host the long-running travel show "Stories in Taiwan," which earned him the award for Best Host of a Travel Program at the 51st Golden Bell Awards. Despite this success, though, Yao remained determined to make it as an actor, continuing the hard work of building a name for himself in that regard for a decade before finally being recognized for it at the Golden Bell Awards in 2020.

When he was in senior high school, Yao Chun-yao joined his school’s Modern Poetry Club and began to take an interest in acting. He chose to major in theater at Taipei National University of the Arts, undergoing training as a professional actor; during this, one particularly memorable experience for him was having to make a mask of a character’s face for one class, wearing that mask as a representation of how an actor steps into a role, letting go of the baggage of their own life.

During this same period, Yao encountered the Polish theater director and theorist Jerzy Grotowski's concept of the "holy actor," which requires the actor to let go of the inertia of the ego and let the body exercise its inner self in daily exercises, overcoming subjective thought and entering a state of unity between mind and body in performance.

Influenced by this theory, before filming began, Yao would break away from his usual habit of following Muraki Murakami's "routine" and diligently spend several months interpreting the new work, including conducting field research, blending the character’s breathing, movements, and thoughts with his own as he naturally became one with the character.

Yao Chun-yao mostly performed in theater until 2006, when he was spotted by director Arvin Chen and appeared in his short film "Mei" as a young man who works at a noodle stall and has a quiet, shy personality; the constant hesitant expression he sported throughout successfully injected a soul into the character. The film won the Silver Bear in the short film competition at the 57th Berlin International Film Festival that year.

Chen was full of praise for Yao's performance and invited him to take the lead role in his next film, "Au Revoir Taipei," in 2010, marking Yao's feature film debut. The film won the NETPAC Award at the 60th Berlin International Film Festival, where Yao was present to accept it.

In 2014, he played Liao Ji-chi in the television series "In a Good Way," quickly achieving popularity. At the same time, his appearances in the behind-the-scenes episodes for the show saw Yao further capture audience and production unit attention, leading to his taking the helm of the show "Stories in Taiwan," going on to win the award for Best Host of a Travel Program at the 51st Golden Bell Awards in 2016.

After three and a half years of hosting an on-location travel show, though, Yao realized that he still wanted to pursue acting, so he returned his focus to the theater. Through this, he caught the attention of director Cheng Wen-tang and would proceed to work with him on a series of three television shows, progressing from supporting roles to leading man. Ultimately this led to him taking on a leading role in the television series "The Mirror" and being honored at the 55th Golden Bell Awards with the award for Best Leading Actor in a Television Series. The program as a whole made quite a splash at the Golden Bell Awards, where it was nominated for six awards, including Best Actor and Actress, Best Newcomer, Best Director, Best Screenwriter, and Best Drama. In his acceptance speech, Yao thanked Cheng for his "education of love" and for nurturing his acting skills.

Cheng Wen-tang himself commented on Yao's acting ability, saying that he has always shown great talent, showing the range to take on such vastly different roles as hot-blooded student revolutionary Hsu Ming-chiang in "The Best of Youth" and playboy Hsiao Wu in "The Coming Through" without any sense of incongruity.

Yao's works span film, television, theater, music videos, and commercials, with standout works including 2013 television series "In a Good Way," 2018 miniseries "The Coming Through," 2020 miniseries "Detention," and his role in 2020's "Dear Tenant," which was nominated for and won six Taiwanese film awards, and for which Yao received great acclaim for his portrayal of a gay man.

However, persisting with his dedication to dramatic acting has not always been easy. At times, Yao found himself in dire straits, feeling physically and spiritually exhausted, but the support of others he had met along the way helped buoy his spirits and keep him going. "Comedy is tragedy plus time," said Yao quoting Woody Allen in describing his decade of hard slog before finally being recognized. This recognition, though, has given him the additional confidence to continue on this journey.