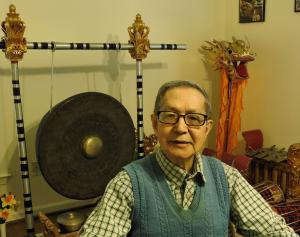 Name: 韓國鐄
Date of Birth: February 19, 1936
Place of Birth: Xiamen, Fujian Province
Did You Know...?
In 1975, Han Kuo-huang (韓國鐄) and student Jeff Abell held their first small concert, entitled "Musica Exotica." However, when promoted in a local paper, it was misprinted as "Musica Erotica." This one typo made for a sensational story that spread like wildfire.


In 1947, Han Kuo-huang (韓國鐄) accompanied his father on his move to Taiwan. While in elementary school, he received the gift of a violin from his great-uncle and began to learn to play from famous musician Situ Hsing-cheng (司徒興城). He graduated with a degree in foreign languages from Tunghai University at the age of 23 and set out into a musical career, joining the Symphony Orchestra of the Taiwan Provincial Education Department as a violinist. Later, he went on to host a music show on Fu Hsing Broadcasting Station. In 1962, he was hired as a music lecturer at the National Taiwan Academy of Arts. During this time, Han wrote articles and reviews for periodicals and magazines, and worked to promote the knowledge of a diverse range of music among the Taiwanese people. Armed with a high degree of English skill and music knowledge, Han became the go-to guy for interpreting and communication for foreign scholars and musicians visiting Taiwan to perform or give speeches.

In 1964, Han returned to study, enrolling at Northwestern University in the US and becoming the school's first student to study music at graduate level without having studied it as an undergraduate. At this time, he learned that composer Claude Debussy was greatly inspired by the traditional Indonesian instrument the gamelan, which planted the seeds for his interest to learn the instrument. During his studies, Han often went to the Far Eastern Library of the University of Chicago, where he discovered many books on Chinese music that were banned in Taiwan at the time. This inspired him to begin learning more about Chinese music.

In 1971, the School of Music at Northern Illinois University hired Han to teach the history of Western literature. Three years later, he earned his doctorate and used his summer vacation to fly to Berkeley and study the gamelan and pipa (a four-stringed Chinese musical instrument). It was during this visit that he finally decided on his life's ambition. The following two summer vacations he made the return trips to continue learning the gamelan and Indonesian music.

During the 1980s, Han was invited several times by Professor Ma Shui-lung (馬水龍) to visit Taiwan and serve as a visiting professor teaching a course on world music and promoting the gamelan music. In 1983, he went to the University of Michigan to study Japanese music. While teaching, each school year he would regularly hold small world music concerts and give an introduction to the genre. He also formed an Asian orchestra to expand the horizons of students interested in music. Of note is that the orchestra mainly focused on Chinese and Southeast Asian music and performed on and off campus, even holding national academic conferences and performance tours.

In 2003, he retired from teaching at Northern Illinois University. The following year, he was encouraged by a professor at the University of Kentucky to continue teaching, establishing a world music course at that school and organizing concerts there. After retiring a second time, Han decided to take his teaching into the community, teaching and giving talks at centers for the elderly, women's groups, museums, and libraries. In addition, he has put on exhibition his personal collection of over 100 instruments from around the world, welcoming educators to bring their classes in to take a look.

Han has racked up numerous firsts in the world of music study in Taiwan: 1) First academic promoter of ethnic music 2) First promoter of music iconography 3) First musician to study at graduate level in the United States 4) First to introduce the concept of world music 5) First to introduce and teach Indonesian gamelan music. Han has a vast knowledge of music from around the world, and a particular love of music from East Asia, Southeast Asia, and the Applachian Mountains. In addition to learning to play, he has also conducted in-depth research, starting with writing articles and criticism and going on to inviting friends to work with him submitting articles to specialist periodicals, writing music textbooks, and promoting world music. This diversity of activity has earned him the nickname of "the chop suey musician (雜粹音樂家)."