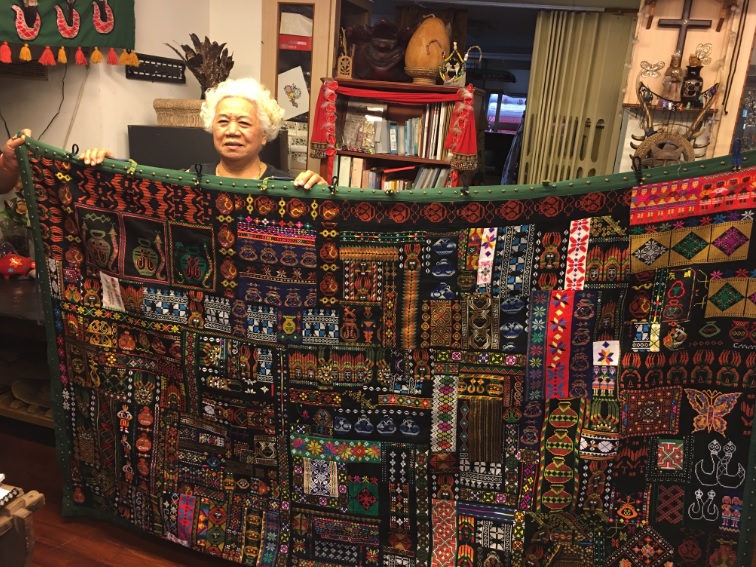 • Name: 陳利友妹
• Born: 1943
• Birthplace: Taimali Township, Taitung County
• Did You Know That …?
The Paiwan tribe observes a strict social hierarchy that is roughly divided into four classes: the ruling class known as mamazangilan, the nobles, the warriors, and the commoners, with each categorized by a unique set of totems and patterns. For example, patterns of the sun, hundred-pacer snake, and clay pot were reserved for the chieftain, while totems such as bronze knives, ceramic pots, and azurite beads signified nobility.


Lavaus, a champion of the beautiful needlework of her people, comes from the indigenous Paiwan tribe that is known for exquisite weaving, embroidering, and woodcarving traditions. Devoted to the preservation and modernization of Paiwan art, the artisan who is now in her seventies has established a reputation for her traditional embroidery techniques and deep knowledge of the tribe's distinctive culture.

Growing up with ten siblings, Lavaus was the only child in her family who manifested an interest in embroidery from an early age. She started to learn tailoring at the age of 16 and has held on to her weaving needles and sewing machines since.

"When I was a kid, my mother did embroidery pieces and made clothes for the tribe every day. After watching her for a long while, I found it natural to pick up the skill," Lavaus recalled.

Also an acclaimed weaver, her mother often came up with new color composition ideas by observing vegetation such as millet. Nature has thus always been her main inspiration. "I simply follow my mother's instructions and study the colors of each plant," the sewing master said.

Her award-winning embroidery artworks include a piece called "Welcoming Gods, Worshipping Ancestors, and Celebrating a Good Harvest (迎神‧祭祖‧慶豐年)." Depicting one of the indigenous group's celebratory dances, it features dozens of bold colors and various types of totems that populate Paiwan lore.

Through the piece, Lavaus sought to illustrate the unique class system within Paiwan society with patterns, bright colors, and engaging composition. Hand in hand, all in resplendent costumes, the Paiwan people featured in the piece can be seen with various colored clay pots placed on the top of their heads and under their feet, indicating they are of a higher social class.

Considering how the tribe's traditional embroidery owes its one-of-a-kind designs to painstaking weaving techniques, each authentic item is as intricate as it is impactful. To keep this traditional craftsmanship alive, Lavaus has been giving lectures for years, passing on the torch so that young Paiwan generations will inherit the priceless embroidery skills.

Furthermore, Lavaus set up Mama Chen Studio (陳媽媽工作室) in her hometown in 1999 to showcase craftworks featuring distinctive Paiwan symbols such as human heads, hundred-pacer snakes, and the sun. What makes Lavaus' recent works stand out, however, is her adoption of the new attitudes regarding once-rigid rules of pattern usage in Paiwan's hierarchical society.

In the past, different classes had their own specific pattern. However, such rules have changed over time, and the patterns that used to be reserved for the ruling class are no longer exclusive to the chieftain.

In June 2019, Lavaus was named an honored preserver of the Tjavualji (大王部落) style of Paiwan embroidery to reflect the unique aesthetics of her hometown Tjavualji, a region of Taitung County that sees frequent exchanges among Paiwan and Beinan cultures.