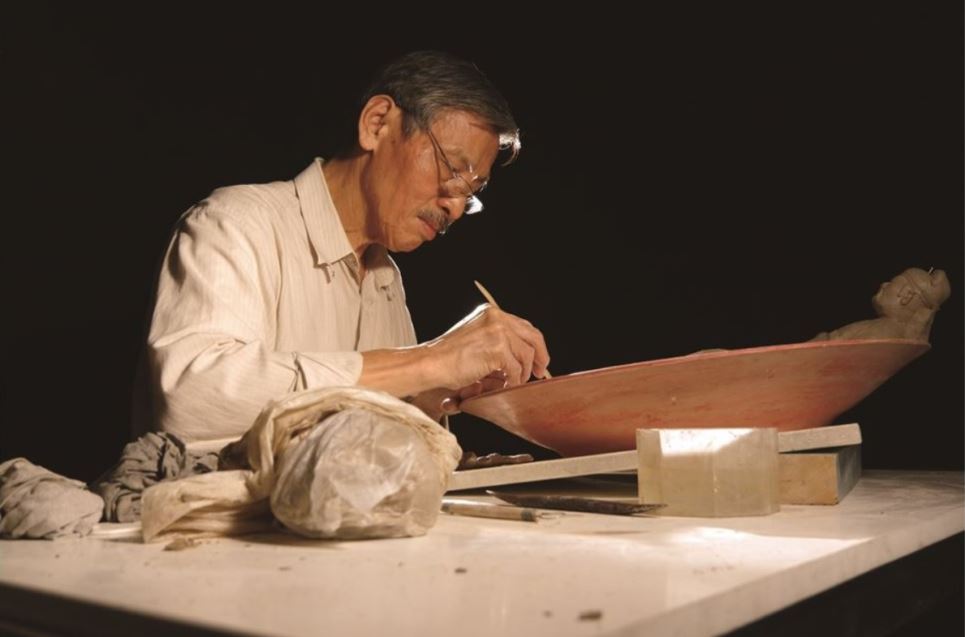 • Name: 林洸沂
• Born: 1951
• Birthplace: Yuemei Village, Chiayi County
• Did You Know That …?
The history of cochin ware pottery in Taiwan can be traced back to the 19th century, when Ye Wang (葉王) of Tainan became Taiwan's first master of the art. For his help in restoring and preserving historic cochin ware works, as well as replicating and teaching the techniques used by Ye, Lin Kuang-i was named by the government as a national preserver of cochin ware and its techniques in 2010.
• Site: https://www.facebook.com/kuangilin/


Born in Chiayi's Yuemei Village, Lin Kuang-i and his family never thought that he would join the crafts industry, expecting rather that he would follow the usual academic route to higher education. He was quite content with this plan, Lin says, until he was 14.

That year, Guangtian Temple (光天宮) in their village underwent major renovations, and every day on the way to and from school, he would stop and stare. The more he looked, the more fascinated he became with the cochin wares that were involved. Fascinated with temple architecture, Lin talked with his parents and ultimately interrupted his junior high studies to begin learning temple crafts under renowned master Lin Wan-you (林萬有).

In 1964, Lin began a 40-month apprenticeship, learning about temple architecture, design, different schools of ceramics, and sculpture alongside his mentor. Eventually, his old age saw the elder Lin retire from temple construction work. It was then that Lin began working on his own, taking on apprentices and creating temple ornaments, reliefs, and cut-and-paste ceramics.

He also moves well with the times. For example, in 1978, he built a modern gas kiln and related equipment, exploring kiln-firing techniques and attempting to raise the firing temperature of hard-to-preserve "soft pottery" from 900 degrees to 1,160 degrees Celsius, transforming it into "hard pottery" that could last for much longer.

In 1980, Lin saw some work by Lin Tien-mu (林添木) at a Confucius Temple in Chiayi and was awe-struck. He sought out the master and began learning the techniques of blending and firing glazes for cochin ware. Thus, he became the third-generation successor to the art of Ye Wang (葉王), Taiwan's first master of the art. In addition to raising the firing temperature, he also successfully addressed the fragility of cochin ware and its difficulty of preservation, enabling it to finally be collected and treasured.

In recent years, Lin has worked hard to move from his early style characterized by fine lines and rich colors into a new direction, by finding ways to incorporate cochin ware with modern life that don't clash with its traditional character. To this end, he has attempted to simplify his lines and evolve his glazes. Lin believes that Taiwanese cochin ware is a distinctive local craft with a future in the international market. There is much room to grow, he says, as long as the craftspeople can keep striving for personal breakthroughs.