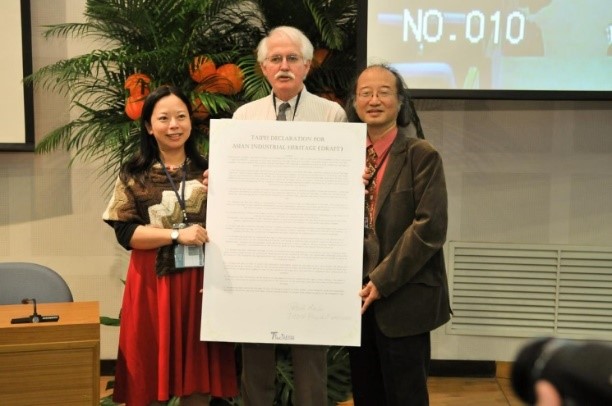 Name: 林曉薇
Born: Feb. 3, 1967
Birthplace: Yunlin County
Did You Know That…?
Lin Hsiao-Wei was elected as a board member of The International Committee for the Conservation of the Industrial Heritage (TICCIH) in 2009. She also served as chairperson of the Organizing Committee for the 2012 TICCIH Congress, which was held in Taipei. It was the first TICCIH general assembly held in Asia since 1978. The Congress generated the "Taipei Declaration for Asian Industrial Heritage," a milestone for industrial heritage conservation.

Lin Hsiao-Wei is an assistant professor in the Department of Architecture at Chung Yuan Christian University, Taiwan. She is currently a board member of the TICCIH, chairperson of Asian Network of Industrial Heritage (ANIH), member of the Cultural Assets Review Committees of Miaoli County and Taoyuan City, and chief editor of publications of the Taiwan Heritage Society.

Lin obtained a PhD from the University of Edinburgh, United Kingdom. Her research interests include reuse of cultural heritage, cultural landscape and landscape planning. She has worked on practical heritage conservation works as well as major research projects domestically.

Secondly, she has been leading students to participate in annual meetings of the "International Council on Monuments and Sites (ICOMOS)" and other international meetings and seminars to deliver research papers, in order to increase Taiwan's visibility around the world, and to encourage students to develop global perspective. She also served as board member and convener of the advisory committee at TICCIH and ANIH respectively, promoting international academic exchange.

Another contribution is putting the concept of cultural asset preservation into practice. Lin has involved in several significant projects, examining the surroundings, designing and experimenting with innovative applications to build links with local community, in order to reconnect people's identity to the cultural landscape.

Over the past decades, the implementation of cultural heritage conservation in Taiwan has been carried out through several stages, from the preservation of buildings to revitalization of the buildings recognized as cultural heritage. Taking the military dependents' villages in Taoyuan as an example, the Department of Cultural Affairs of Taoyuan City Government began to promote the preservation of military dependents' villages in 2001, and "Matsu New Village" was chosen as the first military dependents' village to be preserved. The revitalization project of "Matsu New Village" (馬祖新村再利用先期調查研究規劃) was accomplished in 2007 and the site is now a creative park and base for film and television production. Lin has published a research paper titled "Cultural Path Construction and Challenges of Taoyuan Military Villages," illustrating the process of the revitalization projects and difficulties in implementing the project.

Additionally, Lin was also part of the research team that carried out the multi-year project "Paper Hut Nest (紙寮窩造紙工坊)" at Qionglin Township in Hsinchu. Before the introduction of machinery production to Taiwan's paper industry, Qionglin, surrounded by thick bamboo forests, had a flourishing paper-making industry. Commissioned by the Hsinchu County Government, Lin conducted research on the century-old papermaking industry in the region, and "Cultural Environment Preservation and revitalization of Paper Hut Nest" project was initiated in 2008. The research was focused on exploring the value of industrial cultural landscape and application of the techniques and equipment of the old days. The research team also conducted public forums and community classes to encourage community participation. "Paper Hut Nest (紙寮窩造紙工坊)," which has been successfully running for years, is the result of continuous efforts to revitalize the paper-making heritage in the region.

One of Lin's representative research papers explores the method of operational management at "New Tile House Hakka Cultural District." Conducted from 2014 to 2018 at the Hakka community in northern Hsinchu, the researcher-in-residency project aimed to establish interactive relationship between residents and the cultural park, while the specialists at the "workstations" would help with the revitalization and management of the cultural heritage, through various activities.

Speaking of the challenges of her work in one of the projects located in Hsinchu, titled "The Reconnections and Rebranding of Lioujia Irrigation Cultural Landscape," Lin mentioned that the major challenges were to evoke the recognition of local identity, reconnect people with irrigation cultural landscape, and revitalize the region for cultural tourism development. Many residents in the region considered the canal just the drainage of the city and had no idea of its cultural and historical value. Therefore, she had to think about how to reconnect people’s identification with the region to Lioujia irrigation cultural landscape and how to rebrand the area.

Over the past 20 years, Lin has published more than 60 research papers on topics about cultural landscape, conservation of industrial heritage in Taiwan, reuse of regional industries and regeneration of rural community. In recognition of her contributions in the field of architecture and researches on industrial heritage preservation, she was given more than 20 awards, including "Master Thesis Guidance Award" from Architectural Institute of Taiwan, "Academia-Industry Collaboration Award," and "Taiwan Convention and Exhibition Award" organized by the Bureau of Foreign Trade. She has also won "Outstanding Teachers Award" on several occasions.

Ultimately, Lin's goal is to integrate the basic research of cultural landscapes especially industrial culture, landscape planning and the applied research of restore and reuse. She hopes to apply the results of the research through conducting educational events and putting it into practical operations. Through these efforts, students exposing to the real social environment can enhance their global perspectives and understand their responsibilities. She aims to contribute more to domestic research and development, and, at the same time, to inspire students to join their efforts in working together for the environment in Taiwan.