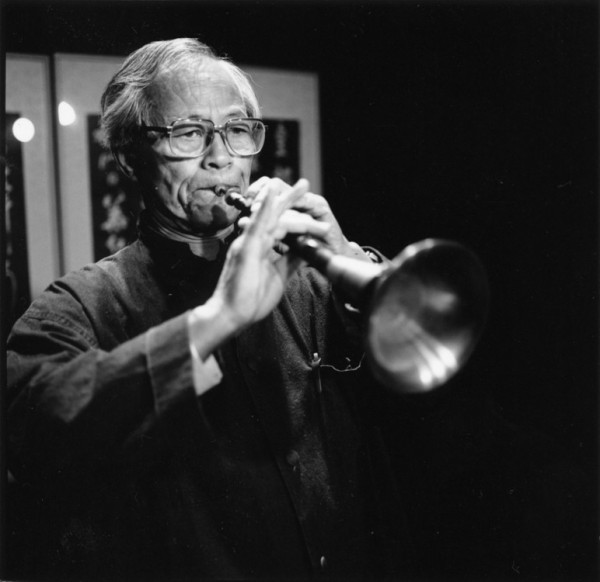 The talented Qiu Huo-rong has spent his life dedicated to the arts of luantan theater music, hand puppetry, and Taiwanese opera. Not only has he been part of a half-century's worth of major Taiwanese theatrical performances, he has also become one of the nation's few professional entertainers simultaneously active in all three aforementioned art forms.

Qiu Huo-rong descended from a family well-established in Beiguan music – his father Lin Chao-cheng (林朝成) had an outstanding reputation in the Beiguan community, while his mother Qiu Hai-mei (邱海妹) had performed in traditional theater since childhood and made a name for herself in xiaodan roles. After his birth in 1934, mother and child eked out a living together.

It was not until the younger Qiu was 12 that he first met his biological father, and two years later he began to follow in his father’s footsteps, playing in a Daoist ensemble for boys. He quickly became adept with drums and cymbals, and learned the basics of the suona, laying the foundations for his later career.

At 17, he moved with his family to northern Taiwan, where he met musician Cai Yi (蔡義). Cai began tutoring Qiu in Western musical performance skills, and at 19 Qiu joined the famed I Wan Jan Puppet Theatre, marking the start of his professional career. For several years, Qiu was lead wind instrumentalist, accompanying puppet master Li Tien-lu (李天祿) through outdoor, indoor, and even radio performances.

When he was 23 years old, Qiu married famous luantan singer Pan Yu-jiao (潘玉嬌), and the year after finishing military service he complemented his professional musical work with a position with Qing Yue Xuan instructing the next generation of traditional musicians. At the same time, he and his wife ran their own small business for a period until the two returned to the theater.

As Taiwanese opera began to overtake luantan theater in popularity in the 1970s, Qiu began turning his attention to that form. Over the course of nearly 20 years thereafter, he directed the vocals of many first-act singers and helped cultivate a number of outstanding later-act musicians.

From Beiguan to Taiwanese opera, it seems Qiu has had a hand in virtually every form of traditional musical performance. In an effort to help revitalize the flagging luantan form, Qiu and Pan even founded the Luantan Jiao Beiguan Opera Troupe and began working to get Beiguan performances into concert halls.

Having dedicated 50-plus years of work to Beiguan, Qiu began to worry that it may be difficult to preserve and pass on the art, and so at the age of 65 he set about the complicated work of compiling musical scores. Then in 2000, he and his daughter Qiu Ting (邱婷) started assembling the scores into teaching materials, including Beiguan suona scores and recordings.

Their work was time-consuming and difficult, covering everything from traditional gongche notations to modern musical staves, recording performance method and demonstration videos, and making audio recordings of actual percussion performances.

In addition, a number of young students around Taiwan have sought to learn what Qiu has to teach them. Without concern for the effort involved, Qiu is always glad to travel to all corners to train and uphold the historic legacy of Beiguan.

It would be far from an exaggeration to say that Qiu – with his artistic commitment, vision, and style – is a leader, creator, and embodiment of the art of Beiguan.