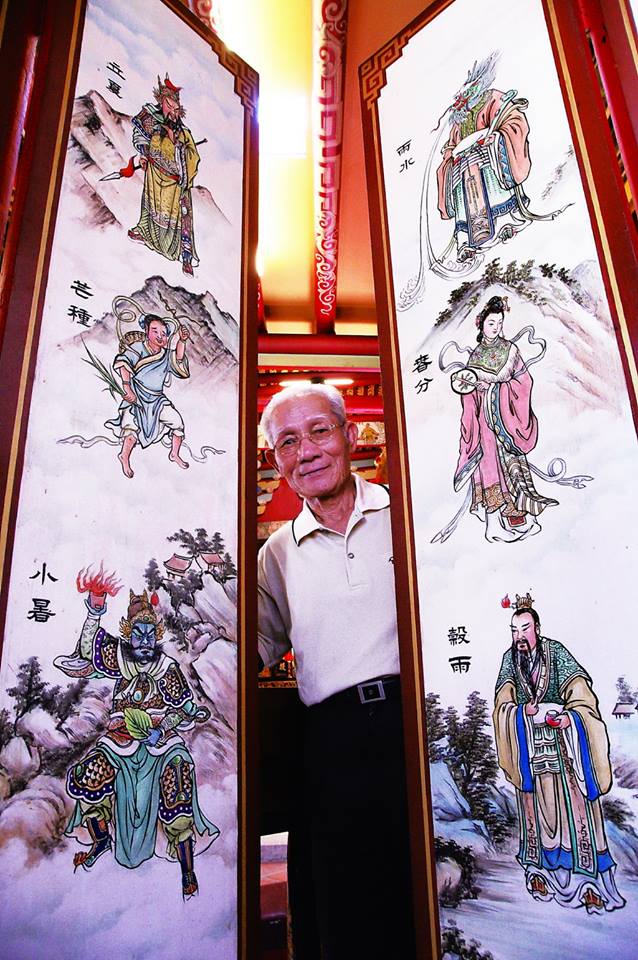 Thanks to his artistry in decorative painting for temples over the past six decades, Huang Yu-chien was recognized by the Ministry of Culture as a preserver of important cultural heritage in 2013, gaining the title of "national living treasure" of Taiwan.

Huang is talented at decorative painting and calligraphy for southern and northern Chinese styles of temples, and knowledgeable about the stories behind these traditional painting skills and the applicable mediums. Among his works, the temple door gods are particularly unique, featuring not only an unyielding emphasis on traditional spirit and methods but also good use of western painting skills.

He believes that the eyes of door gods are the most important part, as the paintings must make viewers feel that the gods are gazing at them and making eye contact from all angles. As a result, his door gods are rich in hue, underscored by a lively look and bright, piercing eyes.

Huang began learning decorative painting from his father at the age of 16 while his father was embarking on a wood sculpturing and decorative painting business in Penghu. In the early stages of his career, Huang followed his father’s painting style, which arranged flower and plant patterns in tight composition and with rich color gradation. However, the younger Huang preferred to put door gods and dragons at the center of his drawings.

Although Huang succeeded his father's trade, he preferred to paint door gods over other subjects. After completing military service at the age of 26, Huang began train with other painters and co-opened an advertisement shop with one of the painters who knew how to paint billboards for movie theaters.

Huang left the advertisement store after a few years and began helping his father work on painting projects for temples and shrines. Shortly, Huang began dealing with contracts from temples all by himself. Knowing that he had been working with his father on decorative painting projects, many temples trusted his artistry and began farming out contracts to him.

In 2008, Huang was contracted to paint door gods for Dongjia Beiji Temple, which is one of the four oldest temples in Penghu. Beginning his apprenticeship with this temple many years ago, he regards this project as his swansong. Huang laments that many temples across Taiwan have opted to construct deity-shaped reliefs on doors over hand-painted patterns, which systematically erodes the crafts of traditional decorative painting. Moreover, very few young people care to learn this hard trade.

Huang always adheres to his principle of "teaching whoever wants to learn." In 2011, Huang was invited by the Cultural Affairs Bureau of Penghu County to lead a group of senior high and college students to repair the door gods of the century-old Beijia Beichen Temple. When working on the repair project, Huang insisted each stroke be done completely by hand instead of relying on computers so that the dimming craftsmanship would not entirely die out.