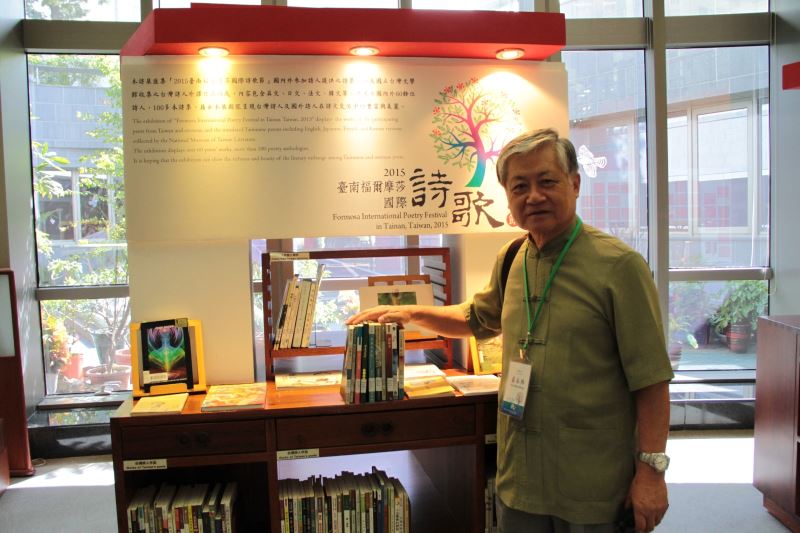 Name: 岩上（嚴振興）
Born: 1938
Died: 2020-08-01
Place of Birth: Chiayi, Taiwan
Did You Know...?
Yen Shang (岩上), who was known for his eight-line poems, had been a tai chi practitioner. The late poet said that understanding the structure of tai chi had led him to the comprehension of the concept of tension in poetry, as well as thinking of the orientation and context of poems.


Yen Shang, whose real name is Yen Cheng-hsing, was born in Kagi (today known as Chiayi) in 1938. He had attended commercial school and later a normal college. He taught at the Chung-Yuan Elementary School and subsequently the Caotun Junior High School in the landlocked Nantou county until he retired in 1989. Over the years, he had dedicated much of his energies to writing until his decease in August 2020.

Yen got his first exposure to the world of modern poetry in 1955, sparking his lifelong interest in the art form. He had his first poem published two years later, in 1957, in the monthly New New Literature. Five years later, in 1962, he chose to start going by a nom de plume, Yen Shang.

After having his poems published in the journal Li Poetry for the first time in 1966, he got to know poet Huan Fu. Through Huan Fu’s introduction, he was able to join the eponymous Li Poetry Society, and began to publish a large number of poems. In 1973, he was honored as the recipient of the first Wu Zhuo-liu New Poetry Award. Three years later, he founded the Poetry Veins Society and started editing the society’s self-titled quarterly journal. The literary journal published its last issue in 1979.

Throughout his creative writing career, Yen Shang upheld his personal motto for writing : "lead a plain and simple life and examine the complexness of the social phenomena, while staying true to what inspires poetry." While most of his earlier works were characterized by a projection of his personal concerns about life and the country, in his later years, many of his poems were critical about chaos in society.

This transformation in his poetic focus and personal concerns was described by critics as a move "from the small self to the greater self." Inspired by the Chinese ancient divination text "I Ching (易經)," Yen rose to fame by publishing poems in eight-line form, with each poem titled and centered around one Mandarin character. Some of his poems were translated into several languages, including Korean, Japanese, English, and German.

Yen Shang was a firm believer that no matter how elegant or refined a poem may be, "it must still be rooted in real life," and that "poetry is a flower that blossoms in the cracks of life." To him, poetry is an expression of real life that can elevate people on the spiritual level, and it is the reflection of the poet’s feelings and experiences of all living beings.

Many of his earlier works were notable for their use of surreal language and phrasing, as well as their general concern with concepts of the self and existence. They were the lyrical, sympathetic, and humanistic works of a young man pondering life. As he grew both as a person and as a poet, he began to gradually expand the scope of his concerns, tying in the external realities of society and paying more attention to the realities of rural life, history, politics, education, and other aspects of collective life.

His poems thus began to transition from personal sentiment to social concern and critique, using a prose narrative form to make profound criticism of society and social issues. In addition to social criticism, his more recent works were also characterized by a philosophical tint, sharing insights from his long life, while his poetic style also began to show a greater diversity.

Earlier this year, in May 2020, Yen Shang published his final collection, entitled "Poetry-sick Flowers of the Fields." Sharing his experience of coexistence with illness and pain over recent years, the late poet moved the literary world with his philosophical mindedness. Over a decade earlier, he had donated his manuscripts and many other items to the collection of the National Museum of Taiwan Literature, ensuring that his works will continue to enrich the historical record and offer valuable insights into the development of Taiwanese poetry.