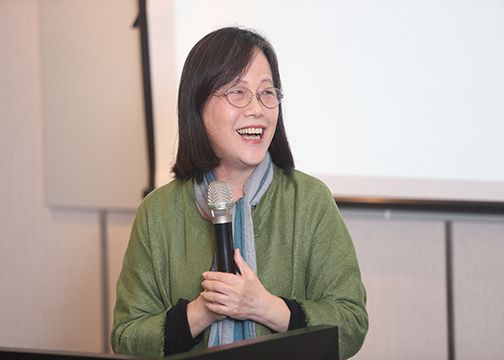 ‧ Chinese Name: 廖玉蕙
‧ Date of Birth: April 14, 1950
‧ Birthplace: Taiwan
‧ Did You Know?
Liao Yu-hui specializes in the transformation of daily life experiences and even broader social issues into stories with literary undertones, crafting them primarily into essays, but also into novels both fictional and non-fictional. She believes that writing and storytelling are the same thing, and that the function of both for her has risen from its earliest use for entertainment and pain relief to a higher level focused on education and the exerting of social influence. In recent years, she has been visiting important writers living abroad, creating a valuable record of the literary world.

In the preface to her 2006 collection of essays, "I Don’t Believe that Tenderness can’t be Called Back," well-known essays writer Liao Yu-hui remarked that "Writing is ultimately just a record of life." Her roots in the literary world stem back to her lonely childhood and its days that dragged on, when she developed a storytelling game to entertain herself, telling a variety of fascinating stories again and again, thus developing a foundation in literature.

Throughout her education and career, Liao stayed in relatively conservative military schools and the university system. She also followed the advice of her advisor to study theater in depth, but she dreamed of being liberated from the barriers of tradition and meter, so in her subsequent teaching and research, she mostly focused on fiction, along with concentrating on teaching classical fiction, drama, modern fiction, prose composition, and literature & film.

In 2007, she took up a teaching position at the National Taipei University of Education, joining the teacher training platform in the same year and serving as a member of the Ministry of Education’s compulsory education curriculum textbook review committee. She was then invited to join the United Daily News as an opinion columnist.

In 2014, she compiled her columns into a book entitled "Writing Isn’t That Hard: Gazing at Light and Dark, Writing Reality and Fiction." While the book may have had "writing" in the title, the topics covered actually started with language teaching, and then gradually expanded to education and social observation, provoking much reflection in the field of education. Liao also hoped that her short articles, written in literary fashion, could serve as an example of a new style of discursive writing.

"Only when one is sincere and does not entertain with flattery and softness will there be splendor on earth. Writing is the same—only when one is honest and eschews fakery, when one’s writing is not overflowing with flowery language, can the writing truly have spirit," says Liao. She has written several readers on classic literature, as well as monographs on teaching strategies for reading and writing. In addition to making reading more attractive and writing easier to do, her biggest claim is that "literature is a practical discipline that is meant to make our lives easier."

Inspired by 2010 Nobel Prize winner, Peruvian novelist Mario Vargas Llosa, who once remarked that the greatest mission of literature is to resist power, Liao believes that literature and literary education is about more than just writing or lessons. Since the Sunflower Movement of 2014, she has been more actively engaged in social movements, taking to the streets alongside the youth.

Liao Yu-hui is the author of several collections of essays, including "I Don't Believe that Tenderness can’t be Called Back," "Flirtation," "If Memory is Like the Wind," "No Big or Small," "Teachers Like Me," "Frolicking with the Spring Light," and "A 50-year-old Princess," as well as academic treatizes such as "A Closer Look at 'The Peach Blossom Fan'" and other works such as novels and picture books. She has been awarded the Literary Medal of the Chinese Writers & Artists Association, the Dr. Sun Yat-sen Culture and Arts Award, the Wu Lu-chin Prose Award, the Special Contribution Award at the Taichung Literature Awards, and the Wu San-lien Literary Award.

Today, having retired from teaching, Liao Yu-hui continues to write and give lectures, devoting herself to developing on themes and topics around the current social situation and Taiwanese life experiences, watering the tree of language education at the root.