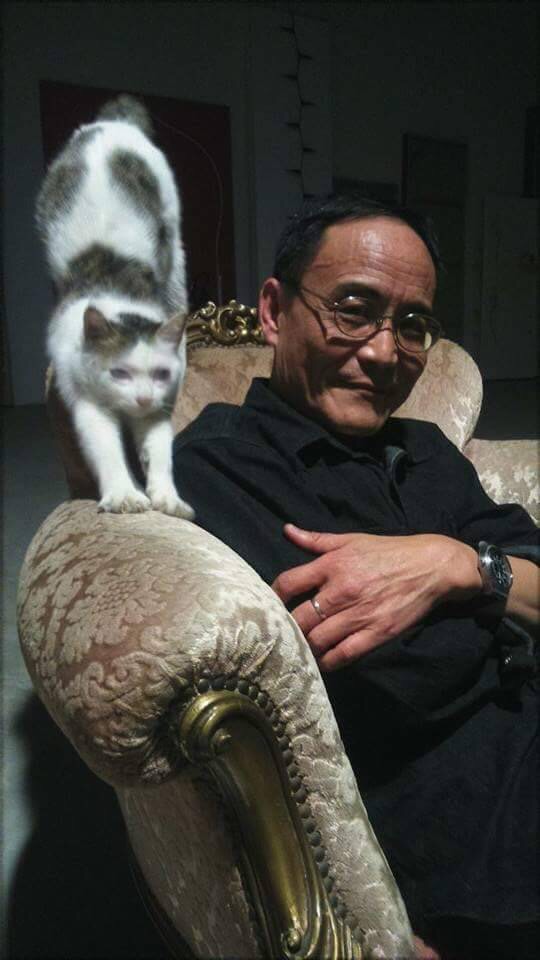 Chinese Name: 林文義
Date of Birth: February 4, 1953
Place of Birth: Taipei, Taiwan
Did You Know?
Writer Lin Wen-yi has written a wealth of works across a variety of forms, from prose and poetry to novels and comics, of which he is most well-known for his prose and essays. In his early days, his prose style was beautiful and romantic, while later, it became more grounded in real life, reflecting feelings of sadness and despair, as well as caring for and reflection on Taiwan’s history. He has previously won the 2012 Taiwan Literature Awards and the 37th Wu San-Lian Award.

As a child, Lin Wen-yi had a fascination with painting, studying it with novelist and cartoonist Lee Fay-mon (李費蒙). Although he intended to continue to develop in the field of painting, he failed to enter the Fine Arts Department when applying for college, and so he transitioned to the Radio and Television Department at the Taiwan Academy of Arts (now the National Taiwan University of the Arts). The cartoonist Tsai Chih-chung (蔡志忠) noticed Lin’s literary capabilities and recommended to him that he focus his attention on literary life. At the age of 17, he had his first prose work published, the piece "Cemetery (墓地)," which was published in the Min Tsu Evening News. Four years later, at the age of 21, he published his first prose collection, “Song is the Wings of Midsummer (歌是仲夏的翅膀).” At the age of 27, he won the Prose Award at the 2nd Times Literature Award for the piece “The Thousand Hands of Guanyin (千手觀音);" the same year, his comic "Journey to the West (西遊記)" was serialized in the young people’s magazine Youth. At the age of 30, he published "Not Looking Homeward (不是望鄉)," and in the same year, he published “Journey to the West” in full. Three months later, he published “Walking through the Rich Fields (走過豐饒的田野),” making a total of three books published in one year.

Lin Wen-yi once worked for a newspaper on the community beat, getting exposed to the cruel side of society. The Kaoshiung Incident was a turning point that transformed his writing style, turning it from romantic and lyrical to a style more focused on concern for the rural people of Taiwan and built around social realism. In the 1980s, Lin Wen-yi joined a poetry society formed by Ku Ling (苦苓), Hsiang Yang (向陽), and others, and joined the ranks of solidarity through the power of words. At that time, he was of the belief that the language of poetry was difficult to grasp and felt obtuse, so he focused his efforts more on the prose direction. Nevertheless, throughout his various works, a certain degree of poetic imagery can be seen integrated into them.

Lin Wen-yi visited the United States in 1986 and met with Taiwanese who had been blacklisted by the ROC government of the time and were living in exile, which inspired him to write his first novel, “The Hometown of Salmon (鮭魚的故鄉).” In 2011, he published “Eight Memorials (遺事八帖),” which he said was a memorial tribute to Taiwan he wanted to leave before he entered his sixties. This novel was assembled from eight long essays that reflected on and reviewed his past personal life’s journey, linking it with the state of the nation at the time and the greater social context. The writing throughout was delicate and refined, reflecting a depth of thought and richness of emotion. “Eigh Memorials” saw Lin win the Golden Award for Prose in the 2012 Taiwan Literature Awards and the 37th Wu San-Lian Award for Prose in 2014.

Lin Wen-yi's creative evolution can be divided into four stages. The first stage was from 1970 to 1980, when his writing was more gorgeous and his style was still in flux; the second was from 1980 to 1990, reflecting Taiwan's flourishing turn to democracy through his own most productive creative period; and the third, post-1990, when he gradually returned to the creation of poetry, as represented by "Love Letter at the Age of Thirty-Five (三十五歲的情書),” which, while not technically poetry, nonetheless reflected a certain poetic essence. Since 2005, he has been moving into a fourth creative stage, publishing poetry collections like "Traveler and Lover (旅人與戀人)” and “Color Resistance (顏色的抵抗)."

His other works include 39 volumes of prose collections, such as "Welcoming Love (歡愛)," "Losing and Finding Your Way (迷走尋路)," "Book of Frontiers (邊境之書)," and "The Chronicles of the Years (歲時記);" short story collections "The Hometown of Salmon (鮭魚的故鄉)," "The Night Lives of Revolutionaries (革命家的夜間生活)," and three volumes of "Your Venice (妳的威尼斯);" three volumes of novels “South of the North Wind (北風之南)," "Blue Eyes (藍眼睛)," and "Istanbul (流旅);" and he also edited "Selected Prose of 2007 (九十六年散文選)."

Lin Wen-yi's works have spanned many fields, including prose, comics, novels, and new poetry. He has served as a cartoonist, newspaper reporter, head of the National Assembly Office, editor-in-chief of Taiwan Review of Books and Literati Monthly, editor-in-chief of the Independent Evening News supplement, TV host, and political commentator. He moved around through different professions before finally deciding to return to literature and focus on writing. He once said: "I chose one thing to do in my life and make the best of it. I chose literature. I want to leave beautiful texts on Taiwan's centuries of history."