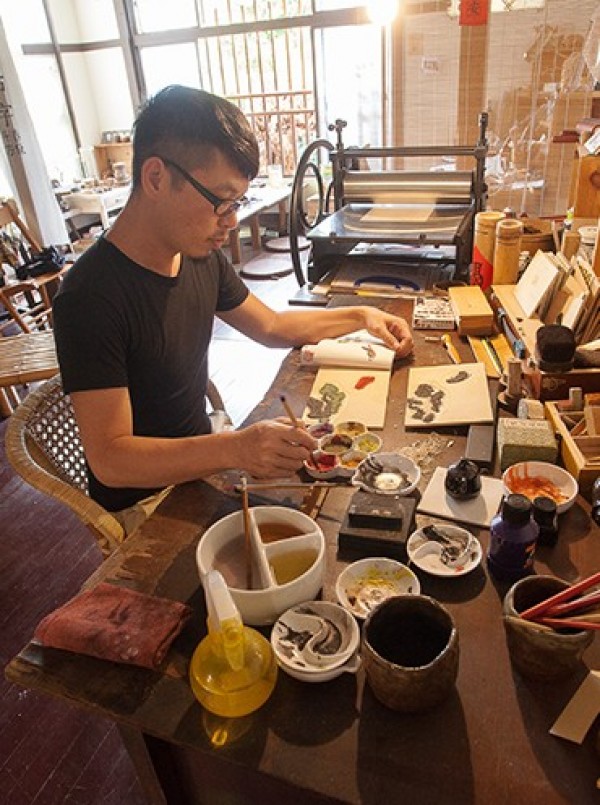 Zhou Jian-xin is a printmaker-turned-illustrator who specializes in using different materials and styles to match the context of each story. Since 2009, Zhou has released five picture books, two of which were created in collaboration with fellow author and friend Kuo Nai-wen (郭乃文). They jointly won the 24th Hsin Yi Children's Literature Award with "Little Bai (小白)” in 2016.

With a master's degree in printmaking from Taipei National University of the Arts, Zhou worked as a printmaker and a teacher before becoming a full-time illustrator. His prints have been featured at several famous exhibitions, including Taiwan's International Biennial Print Exhibition and the World Triennial of Prints and Original Engravings in France.

Zhou says his experience as a printmaker makes it easier for him to develop various styles such as sketching and ink painting for different picture books. "The Maroon Oriole (小朱鸝),” Zhou's first picture book published in 2013, applied the woodblock printing technique to narrate a bird's journey that was inspired by Zhou's own childhood memories in Hualien. The book went on to receive the Golden Butterfly Award, the highest honor in book design in Taiwan.

"Missing Cat Posters (尋貓啟事)” is Zhou's first picture book without any text. After hearing from Kuo, who posted cat posters everywhere to look for his missing pet, Zhou decided to draw about a pet owner's encounter and eventual separation with a cat. Incorporating ink painting and sketching, the book vividly illustrates human-animal bonding to inspire contemplation over pet-owning responsibilities.

In 2016, Zhou released "The Squirrel and the Banyan Tree (小松鼠與大榕樹).” Set against the historical city of Tainan, the publication reflects Zhou's respect for life in spite of its impermanence. The vibrant and warm-colored illustrated book was showcased at the 2017 Bologna Children's Book Fair.

Zhou will be the special guest of the 2017 Taiwan Pavilion at the 31st Guadalajara International Book Fair. His textless picture book "Missing Cat Posters” has been licensed to a Mexico-based publisher, and Zhou hopes that Spanish-language readers will be willing to learn about Taiwanese elements and culture through his heartfelt stories.