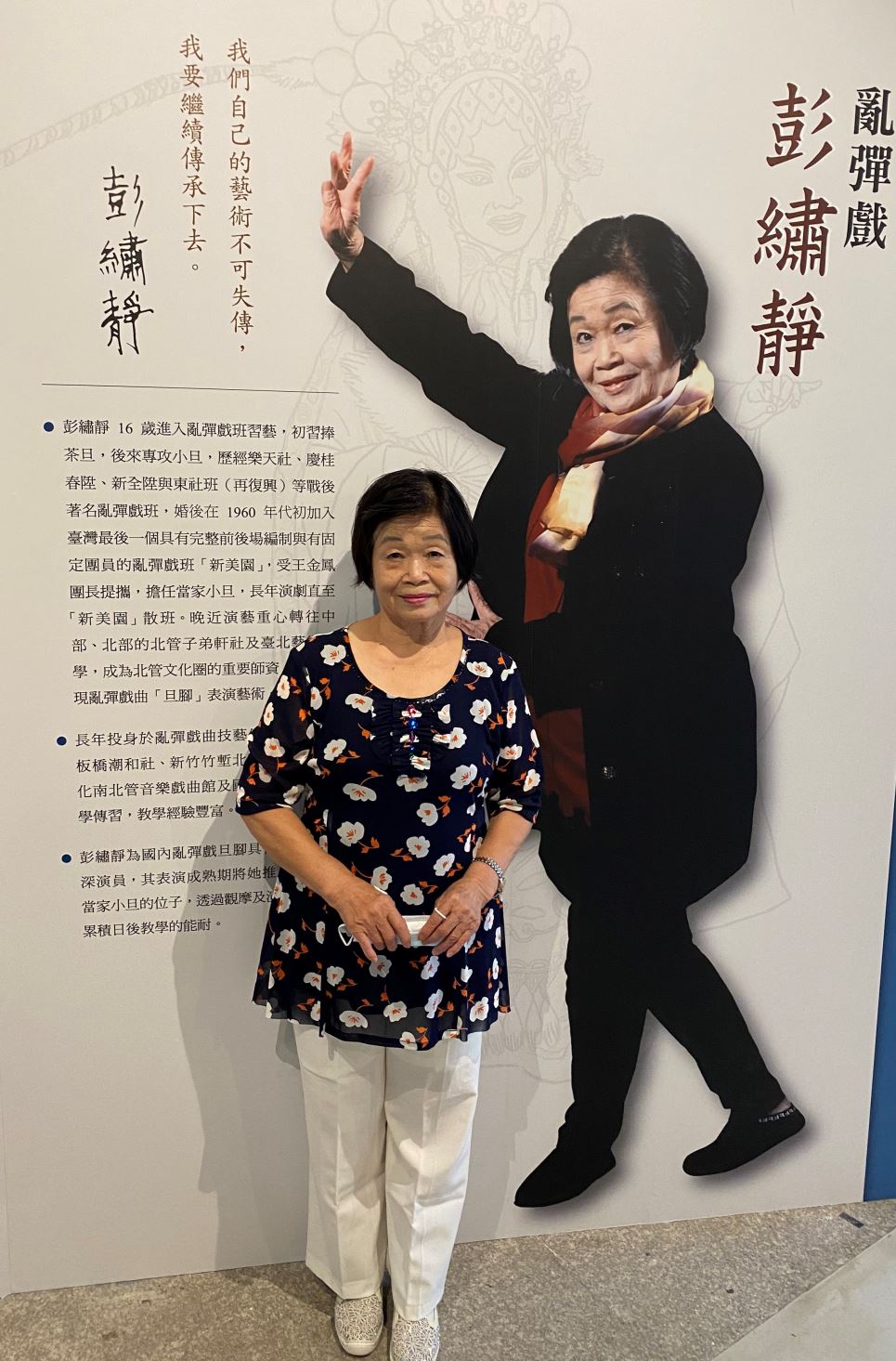 ‧ Chinese Name: 彭繡靜
‧ Date of Birth: 1940
‧ Place of Birth: Taoyuan County (Northern Taiwan)
Did You Know?
Luantan is a kind of traditional opera, originally referring to styles from other places than Kunqu Opera. In Taiwan, Luantan refers specifically to Beiguan Opera. The content of Beiguan is very complex, and it generally refers to music and operas that were introduced to Taiwan from China before the 20th century and not from the Minnan style. Beiguan has had a profound influence on contemporary Taiwan’s traditional culture. While there are few whole Beiguan performances put on in 21st-century Taiwan, Beiguan music is still commonly heard in god-welcoming competitions, battle array performances, and both traditional and modern glove puppet shows. Luantan Opera has a wide range of themes, from family drama and historical epics to tales of heroism and folklore. The singing in Beiguan is characteristically high-pitched and passionate and is widely loved by general audiences. During the Japanese colonial period, there were about 26 Luantan opera troupes in Taiwan. Later, as society evolved and Taiwanese koa-a-hi grew in popularity, Luantan Opera gradually fell into decline.

Born in Daxi, Taoyuan in 1940, Peng Shiou-jing is a veteran Luantan opera performer. As a child, Peng grew up in a family that struggled financially. Her father moved the family from Daxi to Dahu, Miaoli, in order to make a living, but his income was still meager, and her parents struggled to support the many children in the family. To reduce their financial burden, Peng was adopted by a Yang family, and it was because her adoptive parents were Luantan Opera performers that she ultimately developed an indissoluble bond with traditional opera.

Peng's first public performance was at the invitation of the Ministry of National Defense as part of a performance to raise the morale of the military. She played the role of Peach Blossom Girl in "Peach Blossom Girl Fights Duke Zhou" to a rapturous reception. This successful performance gave her a boost in her confidence, and as she continued to perform and grow in that confidence, she also became increasingly fond of Luantan Opera, laying the foundation for a future career in the art. Peng's performances leave audiences mesmerized, and hearing their warm applause is what gave her the confidence to continue on the road of opera.

When she was 26 years old, she officially joined the Xinmeiyuan troupe, honing her acting skills further under director Wang Jinfeng. Xinmeiyuan became Taiwan's only professional Luantan opera troupe in 1977. In 1989, the troupe was invited by the Council for Cultural Affairs and the National Theater and Concert Hall to perform at the National Theater, including director Wang, Peng, and other actors. In 1993, Peng began to turn to teach opera as a career, continuing her efforts to keep the art alive and pass it on to future generations. In 2000, she took up work as an opera instructor at the Beiguan Opera Promotion Association in Hsinchu City. Two years later, in 2002, she provided guidance for Beiguan Opera performances by students from Hsinchu's Shoude High School’s junior high division, as well as serving as a Beiguan Opera instructor at the National Taipei University of the Arts. Over the years, she has contributed greatly to the prosperity and future of Beiguan in Taiwan.

In 2008, Peng was named one of the top 100 artists in Hsinchu City. In 2009, Hsinchu City registered Beiguan Opera as a piece of the city's intangible cultural heritage, especially under the dedicated and patient guidance of Peng over the past decade-plus. In 2020, Peng was recognized by the Ministry of Culture as a preserver of the important traditional performing art of Luantan Opera.

Due to the changing times, the popularization of television, and fewer performance opportunities, Xinmeiyuan is not holding performances at present. Peng is well aware of the gradual decline of traditional Beiguan opera, and over the years, she has devoted herself to teaching the art to younger generations. Today, in her retirement, she continues to work hard to promote Beiguan opera all over the country, hoping to pass on a lifetime of experience and professional skills in Beiguan opera to the next generation and looking forward to keeping her beloved art form alive for even longer.