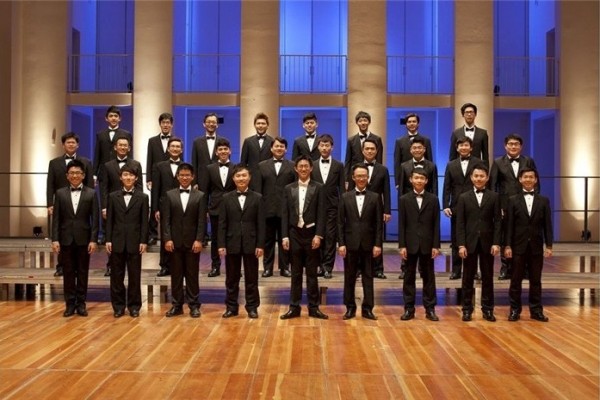 The precursor of the Taipei Male Choir was the Chenggong Senior High School Alumni Choir. Ever since their debut at a concert in the National Concert Hall in 1998, the choir has won both critical and general acclaim. In 2003, the group was chosen by the Council for Cultural Affairs, predecessor of the Ministry of Culture, as a government-supported performance arts group. Under the leadership of Art Director and Conductor Nie Yan-xiang, the choir continues to devote itself to the promotion of male choral music and creative, contemporary performances.

The choir released its first album to coincide with its 10th anniversary; the collection was nominated for three awards in the Traditional Arts Category at the 19th Golden Melody Awards in 2008, in which it captured the Best Singing Performance Award. Europe's INTERKULTUR Foundation also ranked the Taipei Male Choir in 6th place out of the top 500 choirs in the world and placed it first in the male choir category.

The choir has won wide recognition over the years. They have garnered several championships in Taiwan while also winning gold medals in South Korea, Japan, Germany, France and mainland China. In addition, they have attended the Choirs Olympics twice, having also participated in the renowned Takarazuka International Chamber Chorus Contest in Japan.

The Taipei Male Choir incorporated a more student-oriented glee club and a children's chorus into their singing family during 2008 and 2010, respectively. The original male entourage has also collaborated with several choirs; most recently they have worked with German groups, twice with Die Singphoniker (Black Forest Singers) and once with Audi Jugendchorakademie (a youth chorus assembled by the Audi Group), as well as earlier collaborations with the Naniwa Choralier and Vocal Ensemble EST from Japan.

Their repertoire has tapped into melodies from the ancient to the modern; it encompasses works ranging from Renaissance style, pastoral music, Baroque and Taiwanese oldies to the latest soul, rap, and even mash-ups with other musical instruments. Usually their concerts are centered around a thematic medley; in 2012, they presented "The Poem of Ocean” to pay tribute to the oceanic backdrop of Taiwan. The wide-spread recognition they have received is testimony to the Taipei Male Choir's simple but uncompromising wish to become one of the best male choral groups in Asia, in which their endeavors have exemplified the vocal talent of Taiwan.