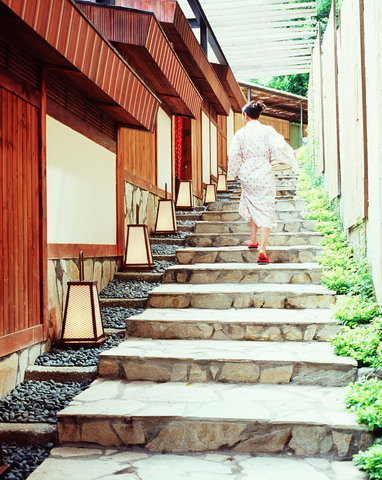 Among all the unique hot springs locations to choose from around the island, the greater Taipei region — which includes Taipei City and New Taipei City — is probably the easiest choice for a quick and simple getaway. Taiwan's capital city and its vicinity have a well-developed transportation system that makes traveling uncomplicated for hot spring lovers.

The Taipei region provides a variety of hot spring choices, especially on the slopes of the massive mountains just north of the city. Volcanic activity, together with plentiful crevices, allow for a rich supply of steaming hot water teeming with a variety of minerals.

The best-known hot spring destination in the greater Taipei area is none other than Beitou District, a region that is synonymous with hot springs and is one of the best areas in the nation for enjoying this heaven-sent natural resource.

Beitou's hot springs are mostly rich in sulfur, and they come in three types — white sulfur, green sulfur, and iron sulfur varieties, each with its own reputed medicinal effects.

The history of Beitou's hot spring industry can be traced back more than a century ago to the period of Japanese rule. Gengo Hirata, a businessman from Osaka, set up the Tianguan Hot Spring Hotel in Beitou in 1896. The hotel was the first of its kind in the whole of Taiwan, and since its establishment its choice of area has occupied a leading place in Taiwan's hot springs industry.

Beitou's hot springs industry flourished throughout the 50 years of Japanese rule and into the post-World War Two era, continuing to grow even after the Republic of China government relocated to Taiwan in 1949. At its peak during the 1950s and 1960s, more than 70 hot spring hotels were operating in the Beitou area.

The huge industry suffered a downturn in the following two decades, due to pollution concerns and the region's tainted association with prostitution. The construction of Taipei's subway lines and the implementation of successful urban redevelopment projects, however, have transformed Beitou into an eco-conscious and morally-sound area.

From five-stars to kids-friendly

These days, visitors can find all kinds of five-star and high-end resorts in Beitou, aimed at catering to those who seek an exquisite and romantic escape. These modern day resorts are mainly equipped with Japanese- or Western-style hot spring villas that offer a more private indoor spa experience.

These five-star spa resorts also provide a wide range of luxurious comforts, such as massages and personal health care treatments, as well as yoga and meditation sessions, along with plenty of medicinal cuisine and Japanese, Taiwanese, and Western dishes.

For those who don't mind simple and humble decor and prefer to seek an old-style hot spring bathhouse, there are also venerable establishments that have been in operation for more than 70 years.

Such Japanese bathhouses separate the genders and tend to attract senior citizens more than other places. It is also much cheaper than the five-star resorts, with a price tag ranging from NT$150 to NT$500 per person.

There is also a family-friendly hot spring location located in the Beitou Hot Springs Park — a public outdoor bathing pool for men, women, and children of all ages.

Currently there are six bathing pools in the Beitou Hot Springs Park facility. Ticket prices are low at NT$20 on weekdays NT$40 on weekends. Surrounded by huge, ancient trees and natural scenery, these public pools allow spring-goers to experience the joy of bathing in a natural setting.

For those itching to stay dry for a while, there are a host of cultural and creative attractions in the greater Beitou area. These include the Guandu Temple, a Taoist temple dedicated to the maritime goddess Matzu, the Ketegalan Culture Center, a museum dedicated to showcasing indigenous cultures, and the Beitou Library, an exemplary model of green architecture and one of the most eco-friendly buildings in Taiwan.