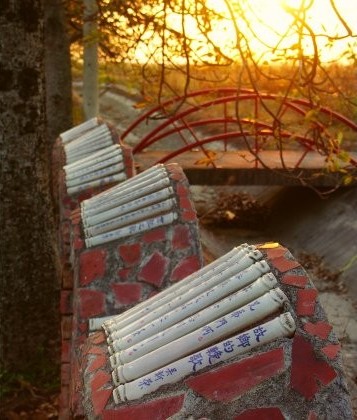 Tainan's tiny Tianliao Village is home to Taiwan's Poetry Road, a 360-meter-long footpath etched with verses and decorated with literature-inspired art. A popular poetry recitation is also held in this rustic spot every year in March, when the pure and gentle sounds of poetry recitation and singing linger in the air and resound through the countryside.

There are only about 70 households with about 300 residents — mostly elders and children — living in Tianliao Village. The small village, whose name actually means "farms and huts,” is a traditional rural settlement with wide swathes of farmland around a few scattered farmhouses.

When the central government initiated a national community-building program in 1996, a group of local passionate residents submitted a proposal to form a local cultural association. The proposal was evaluated as one of the top applications for a community development project and was granted NT$400,000 (US$13,210). That was the first step on the road towards building a literary footpath.

In 1997, the Yue Jin Cultural and Heritage Workshop (月津文史工作室) was established. In addition to collecting historical photos on the region's past, publishing literary articles, and serving as local tour guides, Tianliao residents also built a scenic literary footpath named 'Taiwan's Poetry Road' in the belief that literature would empower the community.

A trail rich in the spirit of Taiwan

The collection of literary works displayed on the Poetry Road includes poetry and songs that reflect the spirit of Taiwan from the era of the Vernacular Movement, a flourishing period spanning 100 years, to modern day.

To preserve these touching poems chosen by the residents in a more lasting form, the famous calligrapher and potter Lin Wen-yueh (林文嶽) from Tainan's Baihe District was invited to help engrave the poems on ceramic plates that were shaped to resemble bamboo slips.

The faux bamboo slips were then inlaid on the surface of a wavy red-brick wall — affectionately known as the Cloud Wall (雲牆)— built by volunteers and local residents from Tianliao village. The project took about two years to finish.

The poetry footpath has since been extended by 80 more meters to showcase a total of 110 poems written by 84 poets, up from the original collection of 78 poems from 63 poets.

To help visitors remember the complete collection and stories regarding authors selected for the literary footpath, several editions of 'Taiwan's Poetry Road Collection' have been released, including the latest version edited by scholar and author Fang Yaw-chien (方耀乾).

Tianliao's annual poetry recitation, which was established in 2001, has also become a great literary celebration in blossomy March. CDs of poetry recitals are available as well.

In the same vein that the Japanese story 'The Izu Dancer' helped Izu Peninsula south of Tokyo to become a world-famous literary attraction, Tianliao has become a true 'literary town' that utilizes its history, cultural assets, literature, and community unity to promote the region's prosperity.

People who come here are truly touched by the sights and sounds in beautiful Tianliao, a bucolic village that not only preserves the literary history of Taiwan, but also reintroduces poetry to people's daily lives.