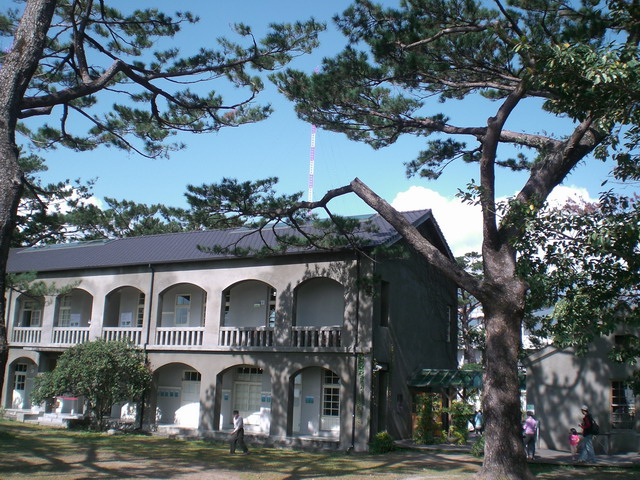 In the past, one of the favorite destinations for Taiwanese ghost-trackers traveling during Ghost Month — the seventh month of the lunar calendar — was a famous haunt called the Pine Garden in Hualien.

Set amid a thick cover of pine trees and vegetation, the Pine Garden has been through several periods of neglect and disrepair, and the thick layer of pine tends to lend itself to creepy shadows and hazy images on moonlit nights. In addition, the winds on the mountain bring what people have claimed were the taut commands of an officer leading troops as they tromped around the buildings, as well as the lilting voices of young women entertaining young soldiers.

Ghosts of the past

The Pine Garden is part of a series of military buildings that was erected during 1944 on the southern slope of Meilun Mountain (美崙山), close by the Peipu Airport (花蓮港北飛行場) where Japanese kamikaze pilots trained for their final one-way flight during the waning days of World War II.

Constructed of reinforced concrete with a Japanese-style tile roof, it served as a recreational retreat for ranking military officers during the Japanese occupation period, functioning briefly as a place where Japanese pilots were feted with "Imperial Wine” (御前酒) and attended by young women the night before they were fated to set out on suicide missions against Allied naval forces in the Pacific.

The Japanese government selected the woods on top of Meilun Mountain as a key military command center because of the geographical advantages it offered. From the mountain vantage one could easily see and deal with boats in Hualien Harbor as well as airplanes landing and taking off at the Peipu Airport.

At the end of the war, all of the military sites on top of the mountain were turned over to local representatives as Japanese forces returned to their home country. An incident that supposedly occurred at that time adds to the Pine Garden's notoriety as a haunted house. Locals claim that a Japanese general became distraught over the number of Chinese people he killed while commanding a unit on the Chinese mainland, and killed himself in a ritual disembowelment (seppuku) rather than return to Japan.

Under the Republic of China government, the Pine Garden then served as a vacation spot for American servicemen on R&R (Rest & Recreation) during the Vietnam War and afterward, until diplomatic ties were severed and all U.S. forces withdrew from the island.

It suffered more than fifty years of neglect until it received designation as a Special Historic Zone in 2000, and its subsequent entry to Taiwan's "Top 100 Historic Attractions” in 2001.

A new lease on life

Today, the Pine Garden has finally been restored to its original grandeur, with wide hallways along both floors, polished wooden floors and light, airy rooms that are used for exhibitions, classes, meetings, and other functions. The garden also sponsors a poetry contest each November, organizes a pottery workshop, and hosts art exhibitions.

The storied past of the Pine Garden would probably come as a complete surprise to the schoolchildren and visitors who spend time in the buildings and on the grounds. Most of the focus these days is on problems like taking care of the famed trees that gave the complex its name. The pine trees of Pine Garden are aging and ailing, like trees in many other parts of Taiwan. The garden operators are carrying out an aggressive program to treat the brown root disease that has felled several of the trees that have graced the front lawn of the Pine Garden for over a century.

For those who are driving in the area or passing through on the coastal bike path here, stop and take a rest and enjoy the view of Hualien. And listen to the sounds. There are no ghosts today, only students and tourists who come here to learn, to enjoy the arts and to enjoy the splendid pines of Meilun Mountain.